The easiest, most accessible trail in the tourist clogged ghetto of Taroko Gorge National Park (really selling this one aren't I?!) that punches way above it's weight is the Shakadang.  Just say it with a bit of omff and with a bad Asian accent "Shakadang!"- and you will be excited and pumped to scuff the marble rocks of this rockin track which is actually an extraordinary opportunity to view some damn fine scenery on Taiwan's East Coast.  I haven't bothered to put up a map as it is flat, short and follows a river.  You cannot get lost or fail to locate this walk.  Easy stuff. 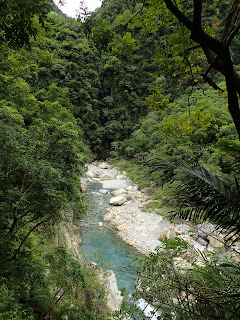 I will write up a whole blog post on Taiwan as a travel destination for anyone interested (soonish, promise) as I think it is a bit odd no one really visits this stunning island and I don't have a problem encouraging tourism to little known areas of the globe.  It's kinda my thing...

Taroko Gorge is beautiful.  It's busy yes, but a must see.  Go see it. 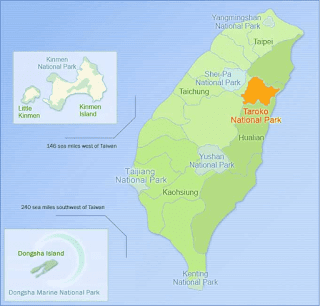 I jumped on a very scenic train journey from Tainan on the West Coast through Taitung and up the guts of the Rift Valley between lots of green jungly mountains.  The Puyama Express was covered in teddy bear stickers, very Taiwan, Chinesey kitsch and flew as smooth as a Hello Kitty doll after a hot wax. 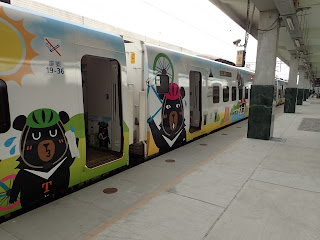 I'm already stretching out the tale of this 8km walk for far more than I can get away with so I'll mention the terminus was Hualien, a friendly town dedicated to Taroko Gorge tourism and cement manufacturing.

To access the park, no charge incurred, you can rent a car (expensive, requires an international licence permit that I am far to lazy to acquire) or rent a scooter (more difficult than it used to be apparently but ask around, I saw a few Westerners plonking around on rentals) or just jump on the tourist hop on, hop off bus (yes, that's what I did, very intrepid and lazy Aussie) for $11 AUD.  A pants browning ride with a kamikaze nutcase Taiwanese driver took about 40 minutes from the bus terminal at Hualien train station to the Taroko Gorge visitor centre and the Shakadang trailhead stop was 2 minutes later.  Thankfully.  I was busting for a massive piss so I padded over the bright red bridge and dropped down the stairs to the trail proper to discover... people fricken everywhere.  I smashed into some jungle bush and hoped it wasn't poisonous and let the bladder drain.  You make your own loo at the Shakadang trailhead. 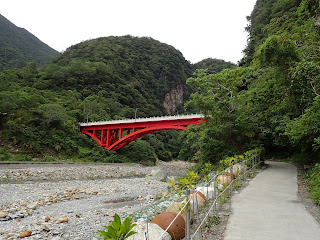 Plenty of keen punters, some in heels and suits but mostly casual Chinese families on holidays clogged the first couple hundred meters of the well paved trail.  The popularity of the Shakadang is quite warranted though, great views and scenery all round, providing you can weave around the dreaded selfie sticks and keep your shit together. 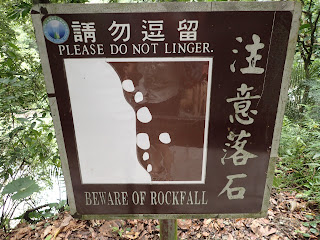 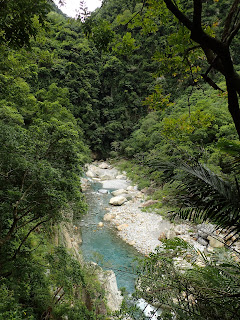 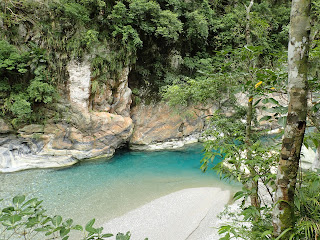 After about 1.5km the crowds thin out which means most of them turn around and head back to the car/ air con bus/ scooter/ whatever and the trail ceases to be paved and narrows a bit and the cliffs poke down a bit menacingly and it gets fun. 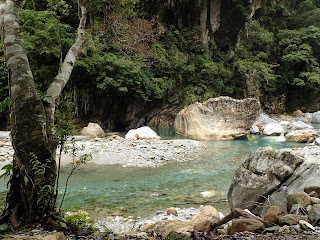 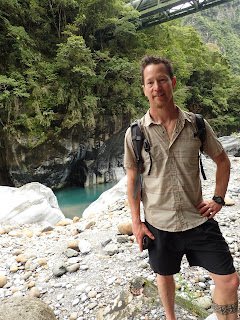 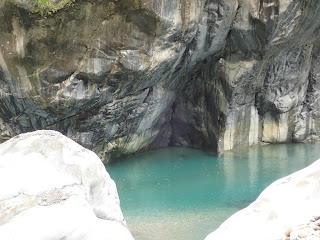 Signs warn hikers not to leave the trail or they will be shot and then killed again afterwards or something like that and I didn't as I'm not excited about or directly drawn to water generally.
However a few Western backpackers dunked their feet in the aqua blue liquid and ground the sand between their toes and they looked like they were enjoying the moment and the world still turned and the river kept flowing so there you go.  Get close up at your own risk. 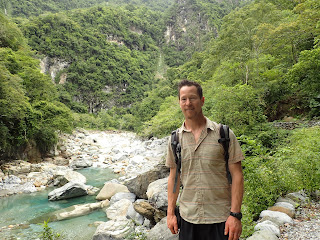 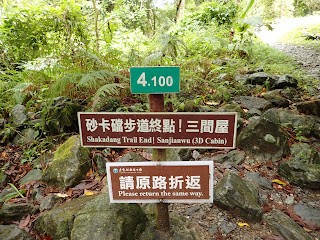 End of the trail means this sign, a primitive dunny, some friendly mozzies and another longer trail that requires a permit (who bothers with permits? Perhaps I should have).  I spun around 180 degrees and rocked out the return journey with the camera tucked away.  No permitted trail for me which was a shame.
The rest of the park is a blast but that's another story.