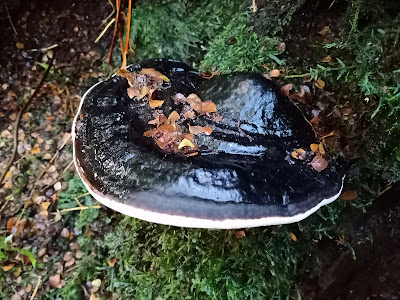 Mt Scott is a flat bump poking out amongst the striking green flora in the Mt Maurice Forest Reserve.

Scott is just shy of 1000 metres high and it's a fun old wander through the ferns and myrtles to reach the South facing viewpoint.  Loads of colourful fungi was sprinkled around trailside during my mid June jaunt through the forest and due to some recent blow downs at the start of the track very few people have bothered plugging through which meant I had the place to myself.

Sort of.  When I rocked up to the track head fairly early on a wintry Sunday morning I was somewhat surprised to see another vehicle already parked.  Soon enough a group of 5 oldies bumbled down the road and informed me they couldn't find their way through the tangle of trees and were calling it good. 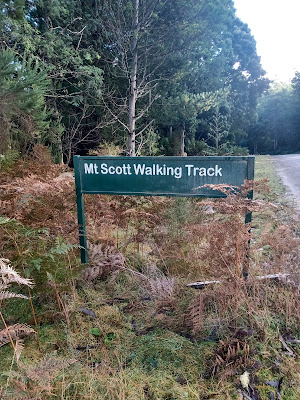 Getting There:
Much the same as for Mt Maurice; 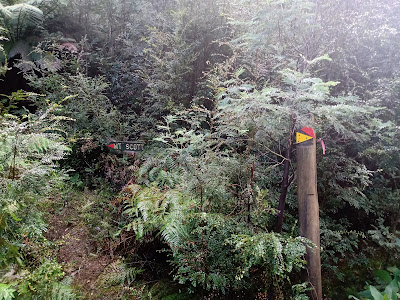 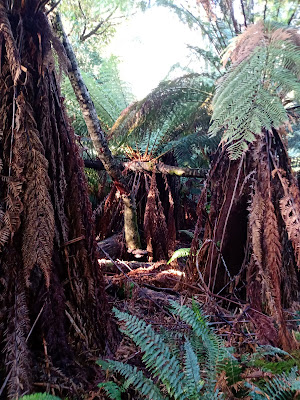 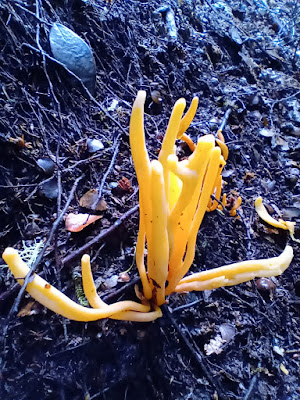 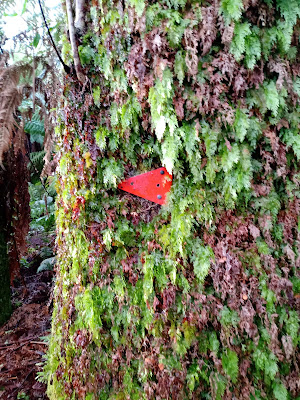 Currently there are a few blowdowns and a bit of gnarly growth impeding the start of the trail.  If you carefully follow the markers and keep on an Eastbound direction the trail gets easier and cleared of vegetation. 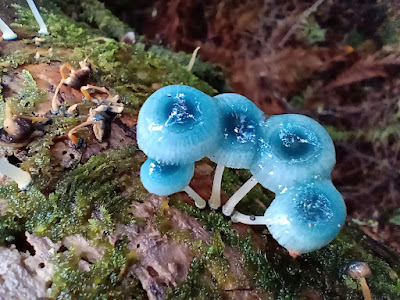 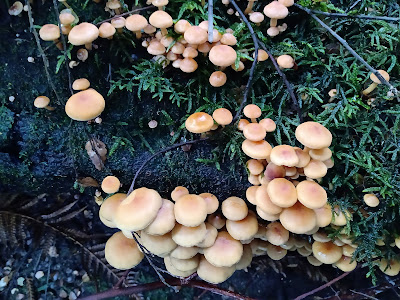 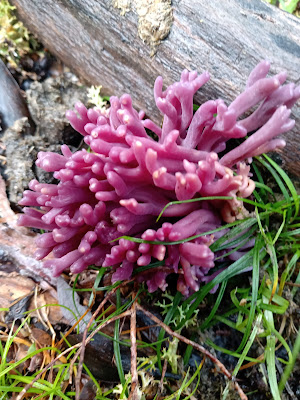 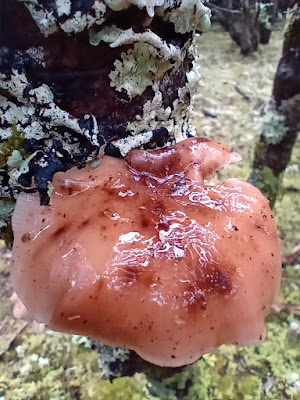 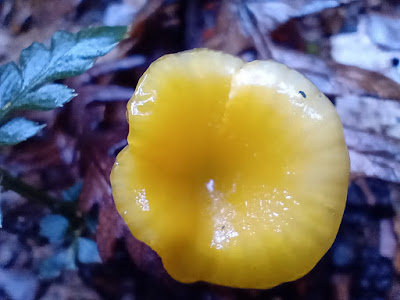 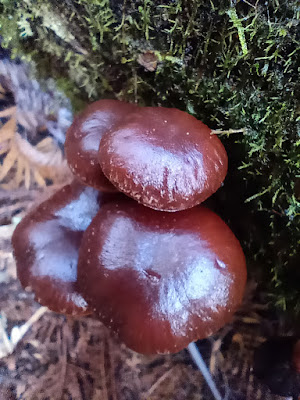 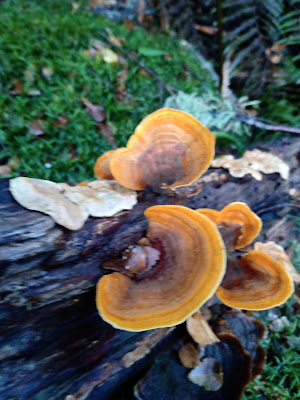 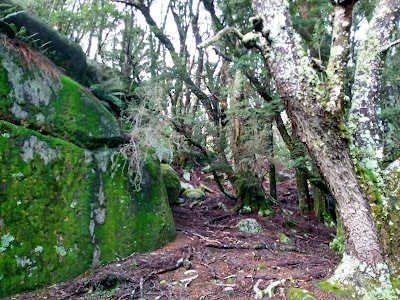 I popped the top on the white plastic cylinder containing an old walkers register and wrote a long winded entry describing how I spotted Mt Scott from Mt Maurice months before and thought that I had better get onto it.  Then I wandered around, had a gander, and slinked back down the track to my van.
A worthy journey to a lesser known natural area. 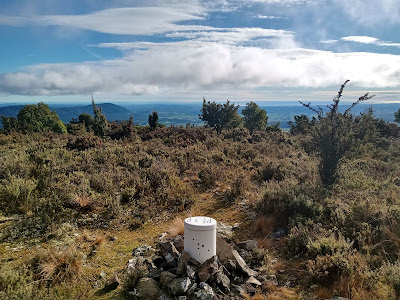 Introduction:
One of the larger 300+ islands that make up the State of Tasmania; King Island is flat, lush, prone to very changeable weather, chock full of fat cows, popular with golfing enthusiasts and known Australia wide for it's excellent diary products.
Don't lose interest yet, it gets a bit better.
I wanted to know what else this island 65 kilometres long by 25 kilometres wide with a population of 1700 people was all about.
I discovered a pristine, unpopulated coastline with long stretches of sand begging to be walked.
The locals constantly yak away to each other and -shock, horror- visitors too, and they were genuinely convivial and helpful.  Nice folks.
Disdain for travelers doesn't seem to exist, yet.
There's an abundance of native bird life and protected areas heaving with wallabies and terrific views.
The lack of hard hitting attractions and tourist development has instead attracted a steady trickle of curious visitors possibly seeking one or more of the following;
1. Solitude, a quiet getaway
2. Golfing getaways -there are 3 courses on the island
3. Offbeat surfing trips
4. Something completely different from the manic tourist shit fuckery that is Cradle Mountain or  Wineglass  Bay on the larger landmass to the East.
This trip slots into the first and fourth motives.
King is a costly destination to reach compared to many other popular Australian holiday spots but screw it,  I was a longtime curious and a bit jack of all the sudden State lockdowns due to a yet another Covid infection throwing prospective travel plans into disarray.
So I stuck close to home and coerced that woman I live with to accompany me.
Getting There:
No ferries, swimming would be a right feat, so a tiny puddle jumper aeroplane it was.
I flew Sharp Airlines from Launceston to King Island.
The initial flight went via Wynyard on the North Coast and took around 80 minutes all up.  The plane itself wasn't a complete shitshow but still possibly the second oldest aircraft I have ever traveled in, held together with duct tape and prayers.
On a positive note, the pilots were first class and the views were sweet.
The return flight went direct to Launceston and took about 45 minutes.
We had to chuck on a mask after parking the car at Launceston airport and keep our faces coddled up until reaching the rental vehicle on King Island.  For us Tassie folk down here where Covid 19 barely struck that was a surreal experience.  Not a big deal but slightly bizarre if you haven't been used to it.
Flights were pricey; $586 return. Per person. 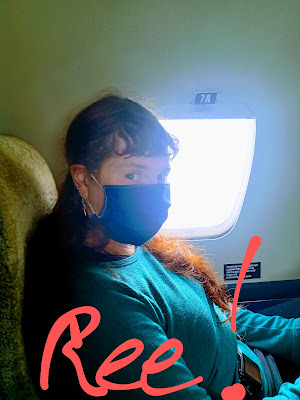 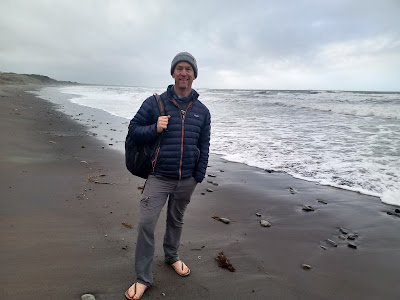 Transport:
We rented a Hyundai I40 wagon from King Island Car Rental which is basically the only official vehicle rental agency on the island.  I think.
The car drove great, cost $460 for 5 days, had a big hole whopped out of the bumper from a recent Wallaby incident and the odometer topped out at just over 133,000 kilometres.
Fuel was available in Currie just down from the supermarkets.  Cash only.
Every single other driver does the finger wave as they pass you.  Everyone.  Every time.  You should too if you make it over here.  I actually found myself waving to fellow motorists as I drove out of Launceston airport upon my return to the big island.  It had gotten ingrained in my brain I guess.
When I head back over (quite soonish I'm thinking) I will swoop in with my touring bicycle and panniers and free camp and explore the island via pedal power now I know my way around and what is out there.
It's a solid option.
The roads are very quiet and we saw locals push prams and walk their dogs along the minor ones and they don't die in great numbers I'm guessing.
However, there is a fuckload of road kill scattered about and the bouncers tend to bail out in front of the cars and trucks all hours.  I kept the speed down because I drive like a dude 30 years my senior and I hate killing wildlife and I don't want to kill myself either.  And what's the hurry right? 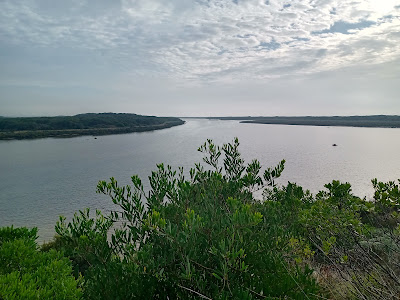 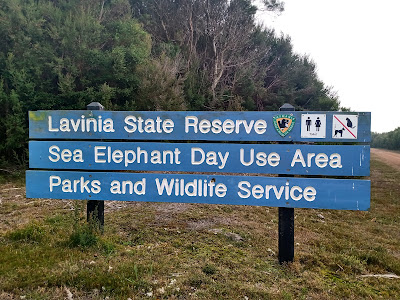 Accommodation:
I booked a self contained cabin over on the East Coast in Naracoopa.  Cost: $428
We struck gold here.  4 nights at Baudins Accommodation with no one else on the property.
Housekeeping were really swish and left the place very clean when we checked in and the kitchen facilities ticked all the boxes.  The restaurant is closed which means you have to be healthy and get off your bum and cook up some tasty food yourself from all that kick ass King Island produce on offer.
The location offers a long wild beach, very few people, absolutely no shops or touristy bullshit and plenty of crazy little roads to wander off down.  Recommended. 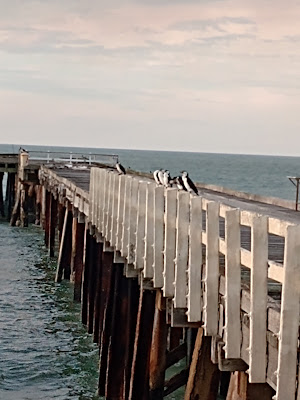 Currie:
The main settlement with the shops and stuff is Currie.
2 well stocked supermarkets (open 7 days), bottleshops, an always packed bakery, the pub and hotel and a butcher.
I had lunch one day at Elle's Beef and Reef, can recommend. 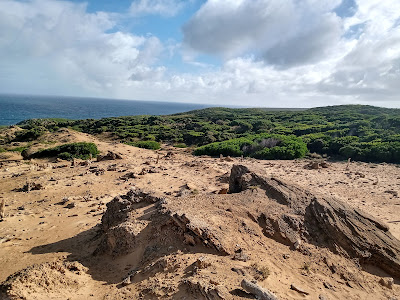 Who cut the cheese:
The King Island Diary cheese store and tasting room adjacent to the rather large factory just North of the airport is one of the island's major attractions.  Lovely little Porky Beach nearby is worth your time too.
Opening times during our April 2021 visits were 11am to 4:30pm, closed Thursday and Saturday.
The set up is simple- you bowl up, request a basic tasting platter and tuck in.  The coffee was solid too even though I was afterwards informed it came out of an automatic machine and there are alcoholic beverages on offer too.
I was dragged in for a tasting twice by my cheese loving girlfriend and we purchased a suitcase worth of delicious milk products to take back home. 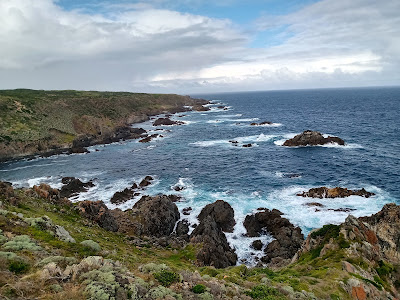 Walks:
This is actually what I got up to most of the time.  You know, walking.  Wandering.  Ambling.  Striding.
The established trails oscillate wildly between lovingly groomed and over signposted efforts courtesy of Parks and Wildlife to "is that a really, really old roo track or the path?"  Much of the time you follow a rarely driven dirt track.
One word of advice- pack accordingly.  If you head over and explore a bit you will be moving around  on a flat chunk of low lying land in the middle of the Bass Strait. It is very exposed and the weather is super changeable.
Best to chuck in a rain jacket and sunscreen (and gloves if it's Winter) and water and toilet paper and a bag for your toilet paper and take a map or use your phone or something to know where you are.
Just saying.
There are loads of options for half day and full day walks.  And plenty of farm gates to open and shut and Kelp trucks cruising around collecting the aquatic plant straight off the coast line.
These were 6 worthy explorations I enjoyed.
A  Cape Wickham Lighthouse.  1km.
B  Stokes Point. 11km return.
C  Naracoopa to the Blowhole.  14km return.
D  Penny's Lagoon.  1km circumnavigation.
E  Calcified Forest/ Seal Rocks Lookout.  2km in total.
F  Cataraqui Memorial.  2km return. 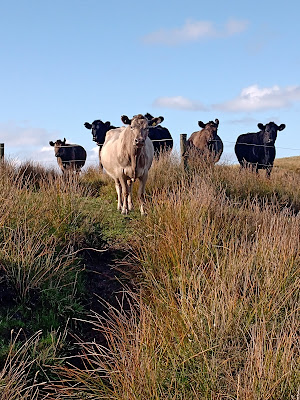 Guidebook and Information:
I photocopied a few pages from Ken Martin's slightly oldish 'Walks of King Island' which I borrowed from the Launceston library.
Aside from one memorable shitfight clambering over branches and blow downs attempting to locate a no longer existing trail the guide is solid and tells you all you need to know.
The ladies at the hire car desk were super friendly and full of great advice too. 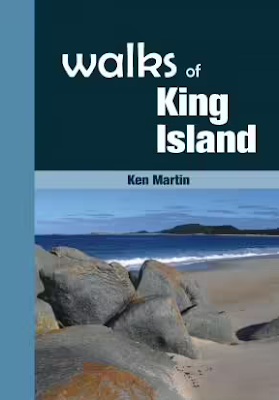