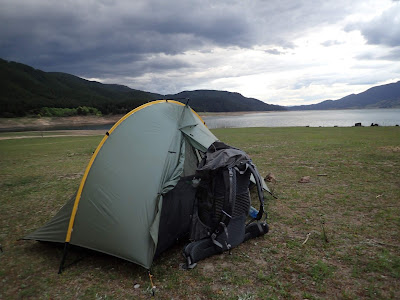 The Hume & Hovell Walking Track stretches from Yass near Canberra to Albury on the Murray River.  It is over 430 km in length and is often derided as a 'road walk' and 'not worth the effort' (actual quotes people used to my face to describe what they had heard of the HHWT before I walked it)...

Well I say fuck that. 😜
True; there is a fair amount of road walking.  And meandering through pine plantations.
But I reckon it's absolutely worth the effort and remains one of Australia's least walked long trails possibly because of the lack of swanky huts and soft resupply options for hikers that are becoming prevalent elsewhere.

I saw more fauna, both native and feral than I can remember ever encountering on an Australian trail, some spectacular eucalyptus forests and the resupply trail towns of Tumut and Tumbarumba were highlights with friendly helpful locals and good services.  So there! 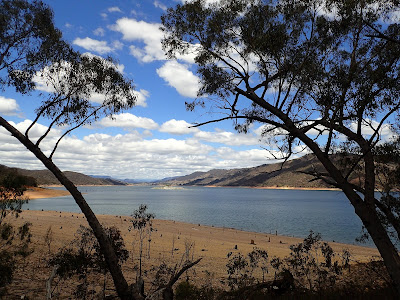 I took 15 days walking the HHWT from Yass to Albury in South Eastern New South Wales, 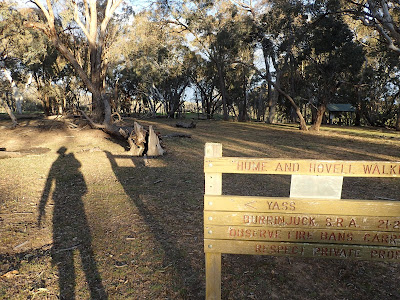 The HHWT loosely follows the direction and some of the landmarks of the legendary 1824 expedition that occurred nearly 200 hundred years ago by a bunch of hardcore colonial explorers lead by Hamilton Hume and William Hovell.
Their discoveries and encounters with local Aboriginal peoples opened up the area to settlement and industry.

These days the landscape is mostly very different from the rich, verdant forests the early Europeans passed through but it's still a buzz mooching along a similar route over 430 km and catching random reminders of that expedition and the era of uncertain frontiers. 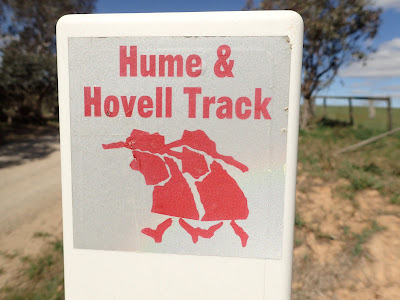 
I photocopied the relevant pages and binned them over the course of the hike as I
advanced.

It's worth checking their facebook page for current trail condition reports and
recent detours. 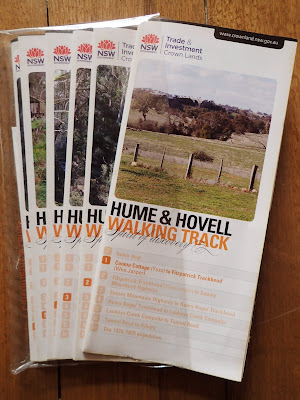 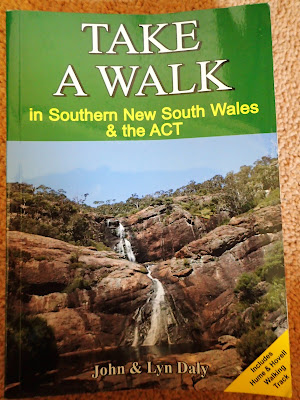 Mostly easy.  All over the show surface wise but mostly undulating fire trails, lush open farmland and country roads with many good stretches of fun single track and the necessary sections of asphalt road to connect this path together.

There are some sweaty steep climbs and boring clear cut pine plantations that kick one's morale in the nuts.
But for the most part the signage was great and the variety of landscape and terrain keeps things interesting.

There is definitely a fair bit effort going into maintaining the trail and by far the best kept section was the stretch between Buddong Falls and Henry Angel where the Hume & Hovell 100 mile Ultramarathon is held annually.  My original intent was to go over and run the event but then I decided for the effort required to travel there I should hike the whole kaboodle.

Shame about the chronic infestation of blackberry constantly sighted in the valleys and creeks but that's the way it is right. 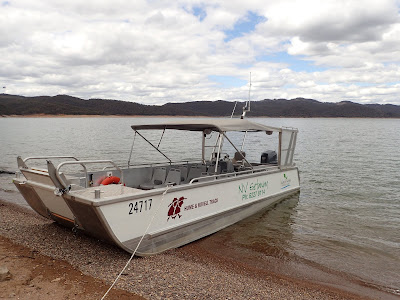 I flew from Tasmania to Sydney and took the early train to Yass Junction (around 3.5 hrs) where I was dropped off in Yass town 4 kilometres away by 2 lovely ladies.

I located the Yass Camping Store and procured a gas canister for my cooker. Website.

I decided against starting the hike at the traditional Eastern terminus; Cooma Cottage about 5km away.  The notion of 10 km return road bash on busy highway for the sake of tagging a sign didn't rev my engine so I started in Yass.
However many end to end hikers do start at Cooma Cottage where explorer Hamilton Hume lived from 1840 onwards.  Your call, be a purist or start where you want.

Tumut is a large country town with a number of hotels and major supermarkets and the Riverglade Caravan Park where I pitched my tent. Website. $20 a night, great facilities.

I grabbed another gas canister at Toms Outdoors and chatted with Chris one of the owners, cool shop, cool people.  I also buy a bit of stuff online from their website here.


I accessed Tumut by calling the Tumut Taxi Service 02 6947 1666 from the Snowy Mountains Highway. It's 10km North of where the HHWT pops out and costs around $30.
Alternately you could stick your thumb out or walk.

A kind local who shall remain nameless shuttled me out of town the next morning back to the trailhead.  Thanks mate! 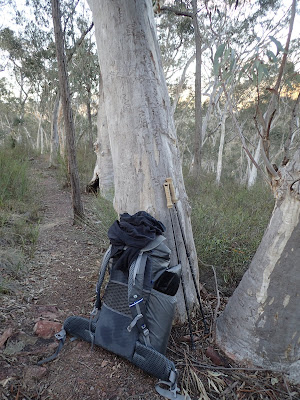 I stayed at the Tumbarumba Creek Caravan Park Website in a Jangugal Cabin for $93.  It was a good stay and the laundry facilities were welcome.

Supplies can be sourced from the large IGA supermarket on the main street.

I accessed Tumbarumba (or 'Tumby' as the locals call it) by calling Ria at the caravan park for a pickup.  I initially tried hitching but gave up due to lack of traffic.
Town was calling...
Ria's husband Peter facilitated my return to the Henry Angel Trackhead the next morning, I paid them $20 for 2 rides.

The Great Aussie Holiday Park is a well set up place with grassy tent sites.  I paid $25 for a campsite and bought some lamb rissoles from the basic shop. Website.
Make sure you fill up your water bottle before heading off, I forgot and hiked 23 very warm kilometres to the Ettamogah Pub.

I sent a package to the Great Aussie containing non hiking clothing and snacks and a book which they kindly held for me.

The Ettamogah Pub is a fantastic place to smash some beers, get a good feed and charge up the phone.  Kitsch and touristy but very useful.  Only a couple of kilometres from the Table Top Reserve.
Website. 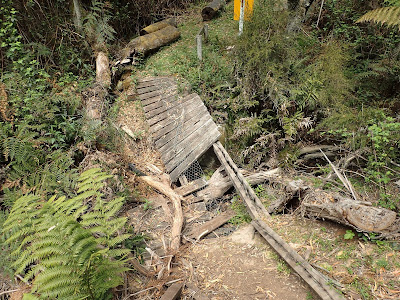 The HHWT leaves dry land for a 6km section between Burrinjuck Waters Holiday Park and Cathedral Rock.  The Holiday Park operates a boat transfer and Wendy & Dean are friendly, helpful folks.
The boat ride cost me $30 and I was scooted across immediately even though I rocked up a day early and was booked to travel the following day. 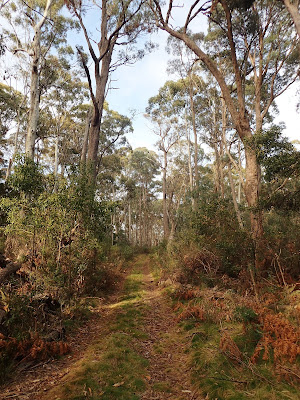 
*I estimated my daily mileage from the distances given on the maps.  I'm not too fussed as what I actually did, these figures just give you an idea of my impromptu itinerary. 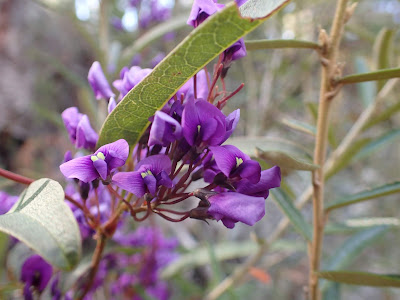 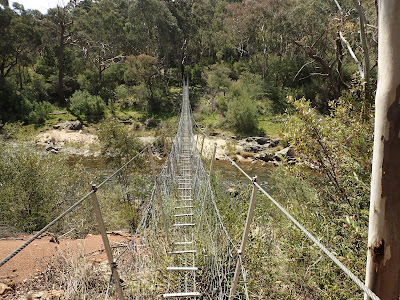 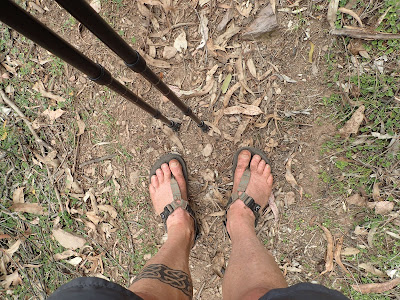 What I wore & carried:

The weather was mid 20's at this time of year so I rolled along in shorts and shirt mostly.
I wore Bedrock sandals on the flat easy firetrails and Topo MT2 trail runners on the bumpy parts.

I used a 3 season quilt and merino leggings and long sleeve top during the night when things got cold but mostly it was fairly warm.

My 60 litre Gossamer Gear Mariposa pack was more than ample. 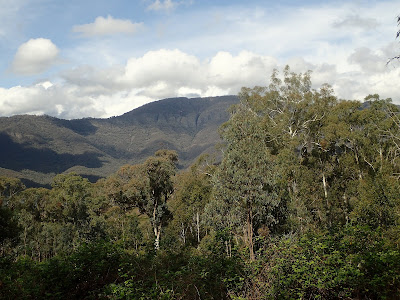 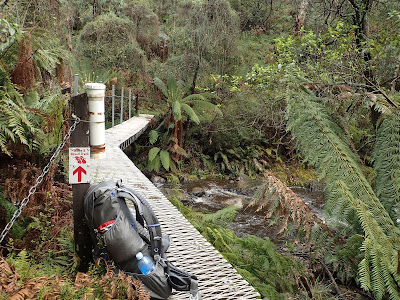 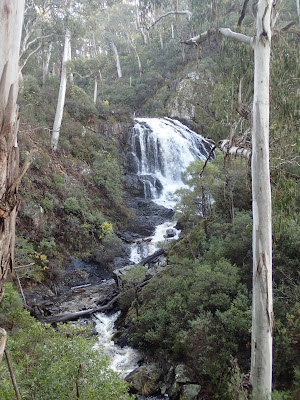 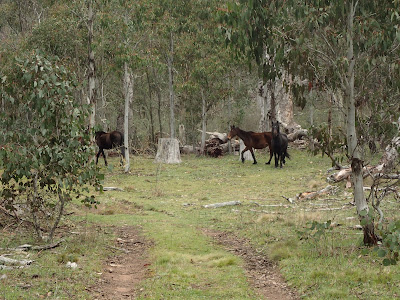 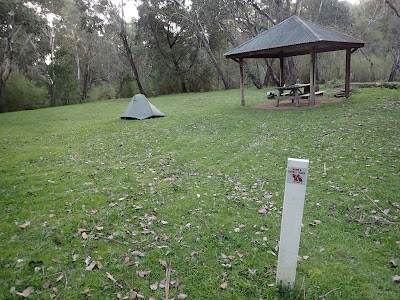 Every 10 to 20 kilometres are purpose built covered picnic shelters with tables, sometimes a water tank (if not then there is a creek or lake nearby) and a flat area to camp.

There is always a nearby road, in fact some are right on sealed roads.  One I stayed at, Mannus; was a tad rundown and painfully close to the road.   However I slept 13 hours straight through and didn't hear a peep.

No one ever disturbed me and I only encountered kangaroos, brumbies and fantastic birdlife. 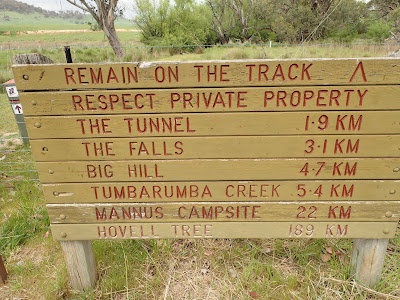 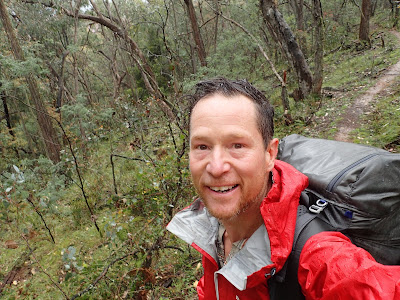 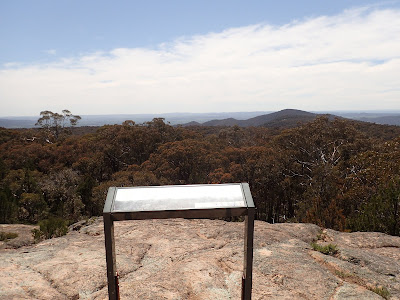 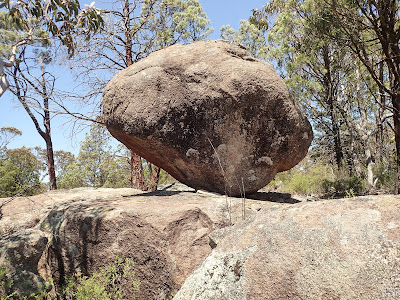 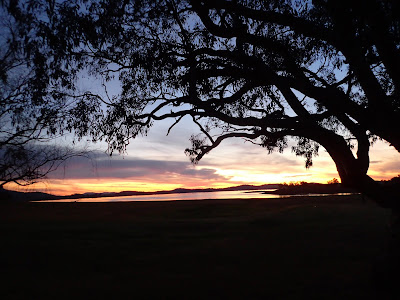 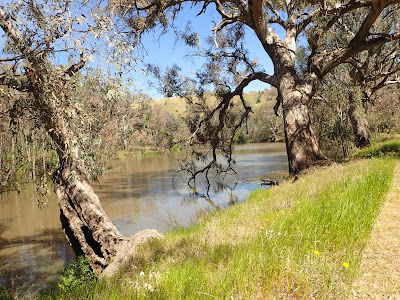 Things I would do differently:

I took a shitty little Sawyer Mini.
Woefully inadequate, I should have packed a Sawyer Squeeze instead.
The bag ripped first, so I hooked it up to a large Platypus then the filter got very clogged and I hadn't chucked in the back wash syringe when I packed up my kit in Launceston because...well it's bulky and I rarely use it.
And  I'm a nuff nuff sometimes and I neglect to bring things I probably should but hey, who's perfect?!

Good trick: I purchased an overpriced bottle of 'sports water', whatever the heck that is, and utilised the sipper top to backwash the Sawyer Mini when needed with clean filtered water.
This was painstaking as getting clean, filtered water initially from a blocked filter in order to then clean it, required patience and this back-flush method doesn't do a great job, just an adequate one.

Hard to believe but I forgot to bring toilet paper.  I had a few wet wipes but luckily I don't mind the 'back country bidet' method and (fortuitously) all of the campsite outhouses had tissue roll in them.

Yup, a simple pen that worked would have made signing the sporadic trail registers a tad easier.  Instead I had fun & games attempting to write with the flogged out pencil stubs and duck taped broken biro's tucked inside the rolled up register forms. I grabbed a decent one in Tumut but probably should have bought a packet and left them in the plastic screw cylinders where the registers were located as well.  Anyway.