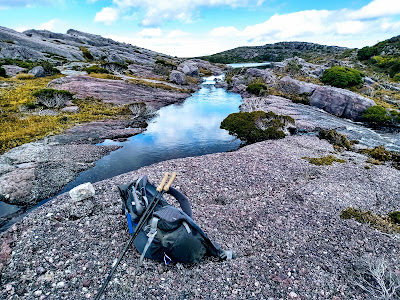 Recently, the fair isle of Tasmania was blessed with a fortnight long, perfect weather window.

These happy occurrences usually compel me to pull a few sick days at work, making the most of clear skies and a fortunate life.

I tossed up roaring down South to wander the Western Arthur's or tear off into the Wild West coast and see if all the fuss about this oft mentioned Tyndall Range was justified.

Seeing as how I loathe crowds in our wild places (Yup. The Arthur's were chocka as I suspected, according to reports) I pointed the van towards where the sun sets and enjoyed possibly my favourite short walk in Tasmania.

Truly uplifting stuff I tell you.

HOW I ACCESSED THE TYNDALL RANGE FROM LAUNCESTON:
If driving from the Northern localities, aim the vehicle to Tullah, keep heading South on the A10 for a few kilometres then turn left onto the B28, known as Anthony Road.
Buzz on down the winding highway past the Mount Murchison walk track head and car park.
From the Mount Murchison track head it is around 18.5 kilometres past Lake Plimsoll to a non descript gravel track on the left with shallow pot holes that I had no problems driving through slowly.  This is your parking area and where the walking starts.
Keep an eye out for the pile of old tyres with a bit of red spray paint on them out near the road as a marker.
Leave your vehicle behind the gate (red X) as sometimes it is open, sometimes locked (yellow line).
Grab your shit and head over the bridge, turning sharp left after a couple of hundred metres.  Keep going.  Cross a shallow rivulet and the walker registration box (red arrow) with intention book is on your right and glorious knee deep mud just past it.

SAFARI TRACK RATING:
A well worn footpad wends it way up to Mt Tyndall and the lake.  After that you're on your own dodging cushion plants and Scorparia and crunching across ankle high scrub and traversing smooth Dolerite to wherever you choose.
It's an area that gets abysmal weather for a large chunk of the year and the exposure of the plateau exceeds the Walls of Jerusalem area in my opinion, so be prepared.
No huts or formal infrastructure.  Yet.  I'll get to that later.
The first couple of hundred meters plugging through the head high bush and sloshing mud might win the walk the worst start of any track in recent memory.  Stick at it and get the grind up the hillside past the boot washing brush done, it's worth it. 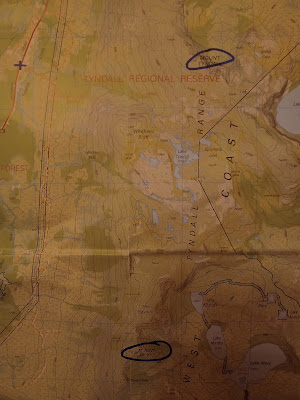 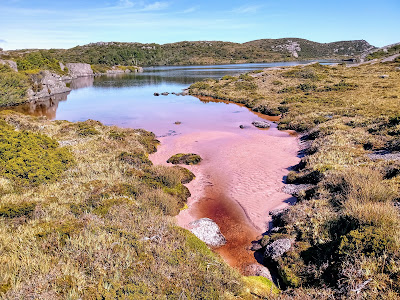 MAP/ NAVIGATION:
I used the Tasmap 1:25000 TYNDALL as shown below.  Mt Giekie is visible heading South for much of the time, I just locked onto the trig point and moved in that direction. 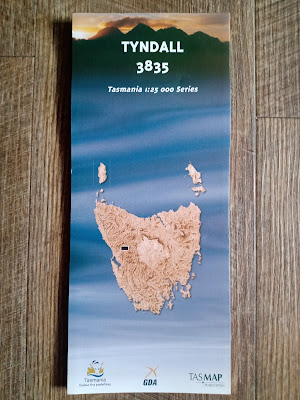 After an hour or two of uphill slogging the track flattens out, culminating in a junction heading Northish to the Mt Tyndall summit and down to Lake Tyndall.
I met a young dude that already had his tent up amongst the flat rocks and low bushes near the the water's edge.  We had a chat, he directed me to check out the numerous waterfalls dropping off the cliff on the Western side of the lake and that was the last human I saw and spoke to for 2 days. 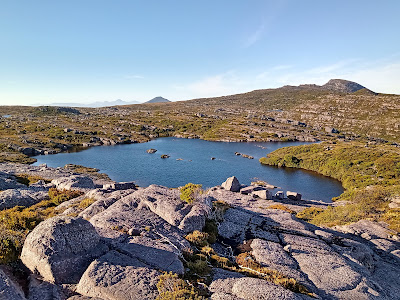 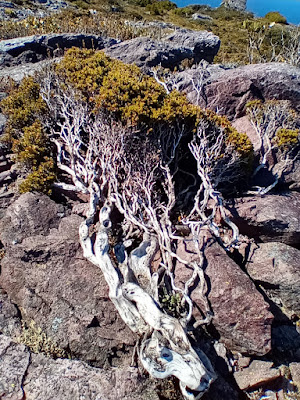 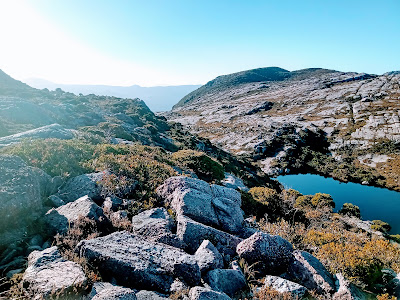 The kick ass weather I experienced had absolutely everything to do with why I cherished my time up in Tyndall Regional Park.   I am pleased to report I found only a slight scunge of toilet paper and no litter or evidence of humans being dickheads in these untouched surroundings.

FUTURE PLANS FOR THE TYNDALL REGION:

Get in before the current right wing shithead Tasmanian State government fucks it all up and pushes through with intentions to market these public lands to weak, cashed up insta-face-page attention seeking wannabe's and establishes huts and cuts benched trails through nearby fragile landscape.

I truly hope this doesn't happen.  There are enough cushy options in Tasmania to entice the unthinking and unadventurous twats who buy into this shit.