Mt Montgomery Road to bush camping on old 4WD road on a saddle off the hill up from Walloa Creek. * 7 hours hiking. (no distance given because it feels irrelevant given the state of the trail at present)

Safari track grade rating: Medium with quite a few blow downs and some route finding.

What a great start to the New Year!
The trail officially starts in Penguin but I know what a road walk feels like so I pushed off into the bush at Mt Montgomery trackhead about 3km from the start.

To be honest I'm not sure if I wandered the trail in 2010 or was it 2011, but in any case it was a wee while ago but I hadn't forgotten the tedious climbing over/ under/ around blowdowns and rougher style of walking track the Penguin Cradle Trail was. And still is.
A torrential rainstorm had me bailing into Wings Farm after the first night all those years ago but I had always harboured a hankering to have another crack at this forgotten Tasmanian gem. 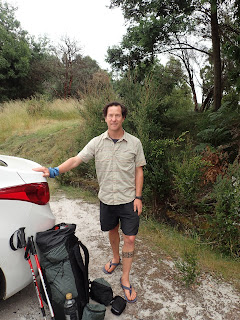 I padded off and noticed the wide, clean path was well trod and the streams were pumping.  The trail tread and markings were excellent until the 'lookout' on the way up Mt Lorymer (up, up, up) and then it all went to shit.  The crazy blowdowns and dense forest pushed over horizontally made for exciting times.  The flat and easy tram line along the Leven River was washed out in places but quite serene and relaxing. No other punters around: I passed 2 older walkers early on a few k's from the track start but that was it for the entire 4 days.  Nothing, no one, zip.  I liked that, ha ha!  I could be a cranky old curmudgeon Edward Abbey style for a few days. 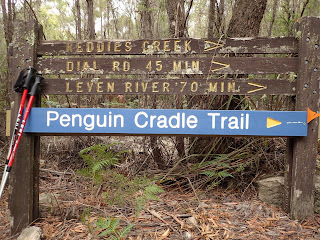 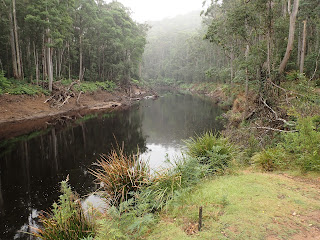 I won't describe every bush and tree and cheesy bluegrass song I sung out loud on the first day of 2017 because that would be dull and self indulgent, but I did spy a possible campsite just off the track in a jumble of dry trees... (top of the trail on the saddle after crossing Walloa Creek and passing through the open farm gate as it turns into old jeep road) 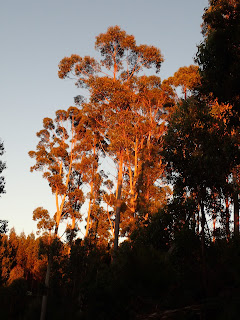 ...and the skies got a little dank and dark and as the distant mooing of cows in the valley below chimed in to answer the native bird calls I thought what an audacious adventure this life can be if we let go of the reins once in a while. 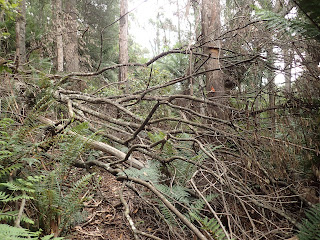 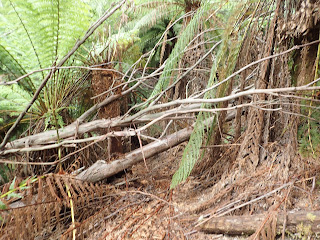 Safari track grade rating: Medium to Difficult given the terrain and washouts, frustrating, remote and isolated.

Strong coffee, hot breakfast noodles that tasted like cardboard and a nice quiet road walk out of Gunns Plains sliding past working farms and herds of goats led to a slippery, smashed, and wholly degraded track. 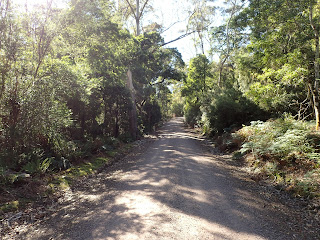 I don't know how else to phrase it really.  It was like being on a sort-of trail after the apocalypse.  60 years after the apocalypse.  Good fun though.  I wanted a real hike and and a jolly ol' good time with blood and cussing and close calls and 'where-the-hell-am-I-moments' and the PCT provides just that and I knew what I was getting into. Laminated signs from the North West Walking Club (more on these fine folk later) situated at each road end/ track end explained the June 2016 floods were responsible for the many blowdowns, improvised route finding that occurred and massive chunks of trail that were swept away.  My vege garden and fruit trees in Beaconsfield took a dusting too so now we know the culprit. 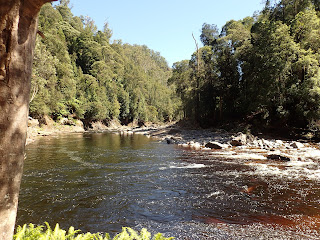 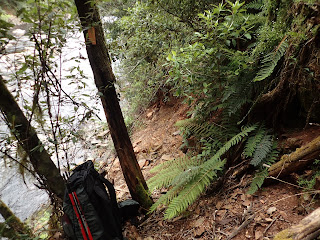 I took 5 hours to hike 5.5km's from the end of Lowanna Road to Blackwood Camp. 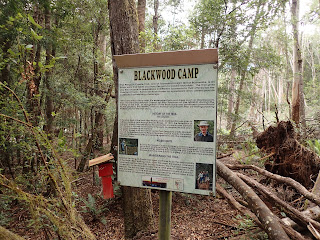 Slow going and no one had signed the register for months.  I put gaiters on at the Tulip Creek confluence, got lost for an hour trying to find the trail, hauled up a big ass rope and plugged up the very steep climb onto the bluff overlooking Leven Gorge as the sky once again darkened.  There are some probable campsites up on the narrow plateau and I messaged my wife with about 2 bars of mobile signal. 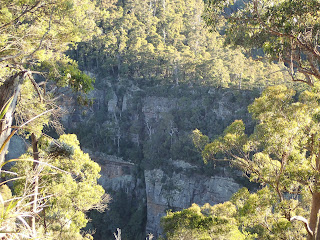 A crazy steep descent plunged down into the beautiful Leven Canyon Gorge and nicely kept track. There are some laughable (but appreciated) ladders that help the walker down small drop off descents near the touristed Canyon area.I fell into much stinging nettle and dropped off crumbly cliff so many times during the day on the other side of the bluff that the carefully placed ladders felt comedic I guess. 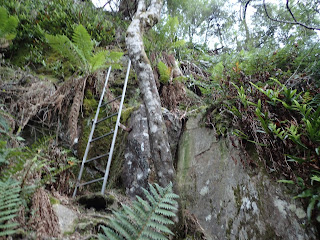 I bumbled around and scraped out a campsite, cooked some scoff and slept the good sleep as the river thundered through the close rock walls all night. 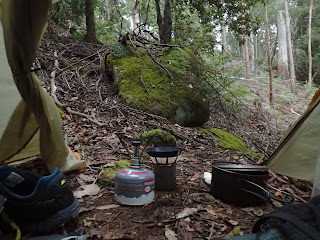 I ripped the PCT chapter out of an edition of '100 Walks in Tasmania' by Tyrone Thomas & Andrew Close that stated the track notes were last complied in 2008.  Apart from the bit about the next couple of k's South of Leven Canyon being arduous (They aren't.  Anymore.  Apart from the human-high man ferns which are just shit's and giggles really) the guide book notes were solid and still relevant and it was an easy cruise on flat, easy trail and quiet road walking to the wrecked out Taylor's Flats picnic site and onto the mountain country and loveliness of Black Bluff. 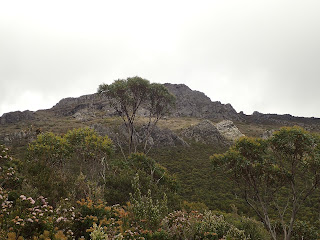 In good weather and clear skies that is, and that was what I was blessed with.
My fingers tingled like crazy from 4 million stinging nettle stings I copped yesterday.  A decent stop and sit down was called for; I brewed up a stiff coffee and silly rice dish thing by Paddy's Tarn and sucked in the sweet air.  No.  One.  Around.  I could go swimming in the buff.  But I didn't because I had much more hiking to go and I respected the sensitivities of the local fauna. 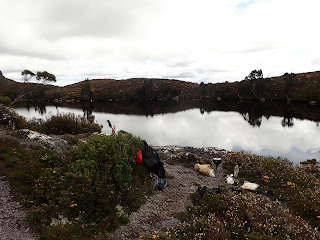 Undulating high country plodding through buttongrass and stupendous views of distant Cradle Mountain and Barn Bluff (am I really getting there tomorrow??!) were the norm after Paddy's. Newishly placed snow pickets lead through annoying spiky shrubs of various heights but mostly knee height.  Knees took a hiding.  Sun was blazing.  Did not really see much wildlife on this hike, just birds and the odd wallaby, which was probably fortunate considering that I couldn't see my feet half the time bashing through blowdowns and buttongrass. 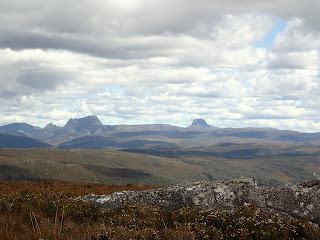 Bare Mount Campsite register had an entry dated 26 December.  The lurking clouds on the edge of the sky sent curtains of drifting rain in,  I wiped the chunks of sunscreen out of my eyes and clumsily placed my hat over my rain jacket hood just in case the sun came back out. Tassie weather, right.  In the Summer... 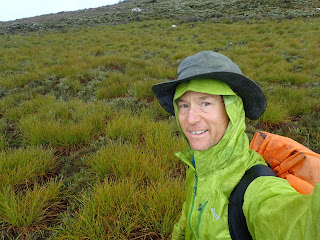 The PCT got a whole lot cleaner after the Cradle Mt link Road crossing (think line trimmer maintenance) and then it all went to hell a few k's on the steep roller coaster run into 4 Ways Camp.. I pushed through maddening overgrown brush and bush and stumbled around until I found the idyllic riverside setting of 4 Ways.  I was the first to sign the register in 6 Months but that was done in the sterile and private environment of my Big Agnes tent as the leeches/ March flies/ mosquitoes/ jack jumpers gave me a very, very warm welcome out by the fire pit.  I pulled half a dozen ticks off my legs and flicked them carefully out the tent door as my dinner of packet crap simmered away and smelt great and tasted fantastic.  Word of advice; pants and gaiters are recommended when rocking through this section of wilderness and insect habitation. 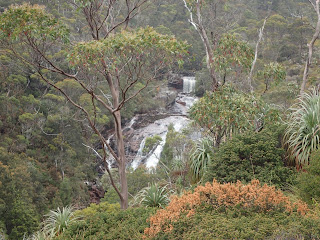 6 hours sleep, cruising out on the track to the Lodge past serene Pandani Grove Campsite (wonder if the leeches are less friendly?) and into 'civilisation' and a crabby bartender at the Lodge.  "Kitchen opens at 12, it's currently 11am".  Cool.  I like walking.  I bought some food and brewed up a Safari -special coffee outside the visitor centre as hordes of tourists and holiday makers poured into the carpark.  How is it I could have been so isolated for 4 days when this circus was carrying on?!  How good is that!  Choose to do anything except the Overland Track and your on you're own.  Bliss. 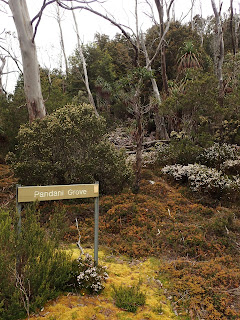 This Summer jaunt of type 2 fun, prolific amounts stinging nettle and wilderness and joyous solitude was made possible due to efforts of the North West Walking Club based in Ulverstone who helped instigate the idea of PCT, put in crazy efforts cutting the track over a considerable period and provide ongoing maintenance.  Thank you NNWC and see you soon on a working bee to help chop up a blow down or two.  But not too many or it won't be the Penguin Cradle Trail and then I won't know where to drive 80 minutes from home and guarantee to leave the world behind. 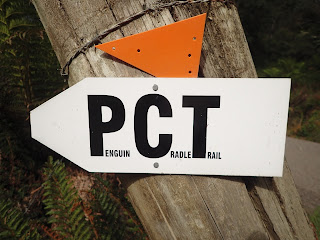