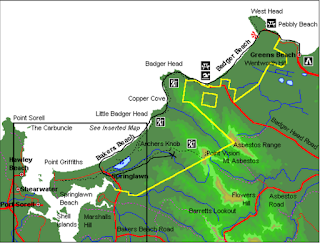 The central Northern coast of Tasmania is one of my favourite stomping grounds- a stunning landscape of mountain ranges and sandy trails and abundant wildlife.  No wonder I chose to relocate close by on the Tamar River a few years ago.  A favourite trail running circuit and occasional overnight hike is the West Head Coastal Track that starts at Greens Beach opposite the fish n' chip shop and skips around the bays and inlets overlooked by resident's homes and holiday shacks to enter Narawntapu National Park taking in 4 tasty beaches and easy coastal hiking.

The black line squiggling around the coast follows my route on Day 1.

When running the entire circuit in one push during a day run the distance is 70km and I start from home in nearby Beaconsfield, however for this overnight hike I was dropped off at Greens Beach negating the need for a 18km road bash. 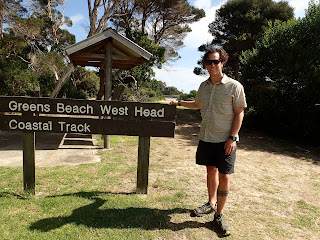 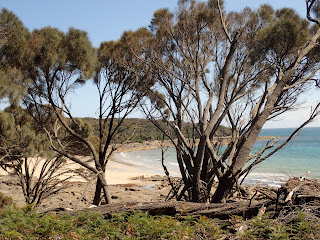 I was lucky on this trip that the tides were in my favour (I didn't check the tide charts as this was a spur of the moment 'get-out-of-the-house' mission).  After 6.5km of sheoak and cliff side meandering the awesome wildness of Badger Beach is encountered. 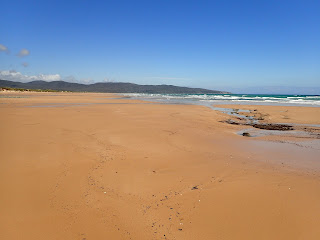 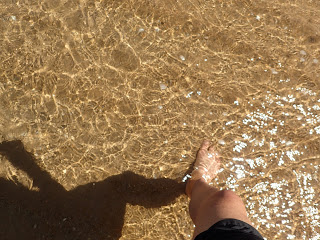 Warm, clear water called for shoes off.  It takes about an hour to reach the tiny cluster of houses on the Western edge of Badger Beach. 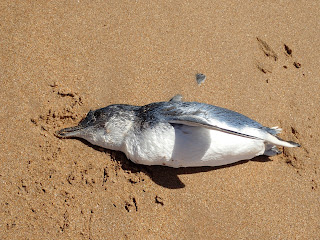 The week before I had a taken a wander down this beach and counted a dozen dead, washed up Little Penguins on the high tide mark in various stages of decomposition.  I sighted quite a few more today on this walk.  Not sure what the go is, it could just be natural attrition- but the coast is 99% litter free (and people free too). 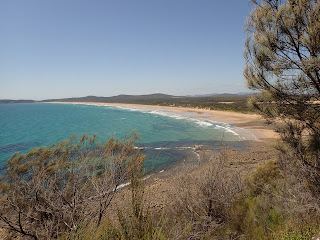 After walking past the public gas BBQ shelter near the Badger Head car park at the 11km mark, (no water but a reliable small waterfall & stream nearby on the trail) I poked up the hill and took in this sexy view. 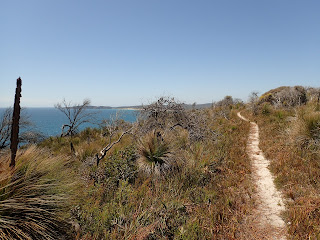 The trail has recently been slashed and combed over with a line trimmer so there was no need for gaiters and those pesky Tiger snakes lurking in the scrub could be more easily spotted. 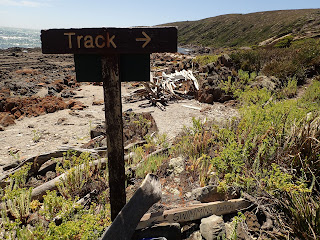 I ducked down off the cliff track to Copper Cove.  This remote pocket of sandy beach and rock outcrops seems to be well looked after, someone has taken on a sense of ownership/ stewardship for the area and placed a bucket with bin bags and signage indicating swimming and water opportunities.  I really like coming down to Copper Cove and hanging out as there is no easy vehicle access and therefore no bogan element. 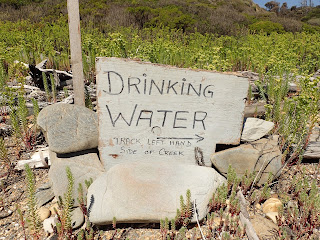 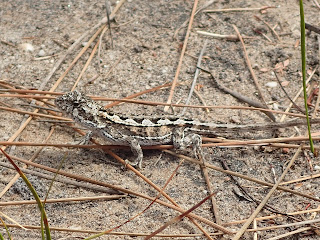 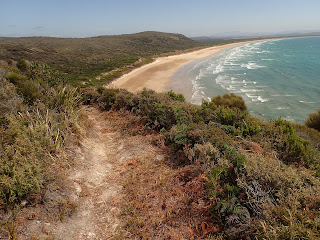 The sun baked down and there is little in the way of shade giving forest cover.  However there is usually a brisk Westerly that plays up after noon and this cooling ocean breeze pushed against me as I hopped down Bakers Beach.  I passed the first 2 access paths to the interior of the National Park and the climb up Archers Knob and exited the beach up over some sand dunes to a car park and quiet wooded trail to Springlawn. 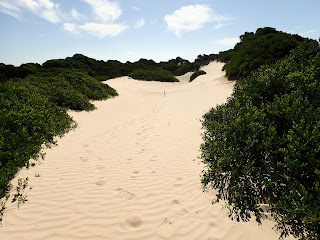 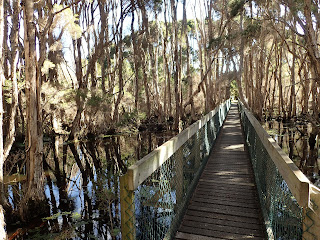 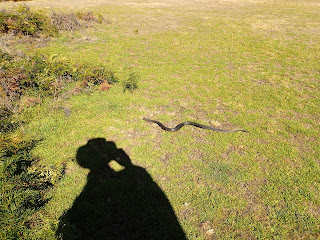 I swung past the bird hide and through a powered campsite to a toilet block where I refilled my water bladders and headed off across the flat, grassy Springlawn landscape.   Narawntapu is touted as the 'Serengeti of Tasmania' in tourist literature.  Perhaps a tad overkill on the description there but yes, there are loads of iconic wildlife to be spotted frolicking around including turbo chooks (as known as Native Hen's), Eastern Grey roo's, Bennett's Wallabies, flies, more flies, plenty of birdlife centred around the wetland's, the odd reptile and then sadly not so many wombats these days.  Mange has taken taken out most of the population in this part of the island and despite widely reported efforts by local volunteers to treat and encourage the species back to healthy numbers- I haven't seen many on my wanderings in this locality for quite a while.  The latest numbers are around 10.  Yes, just 10 for the whole park. 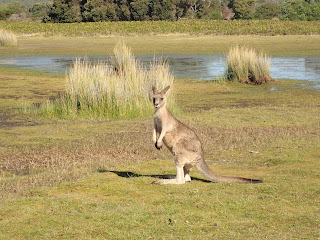 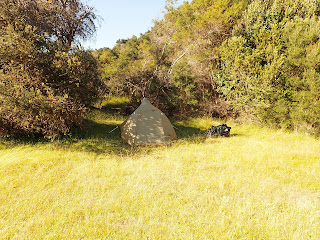 I found a cosy spot to throw up the tent about 2km from the ablution block, got in, said goodbye to the flies and enjoyed the shade.  I spent the rest of the day chilling out watching the curious Kangaroo's bounce around outside and read the entire novel 'The Alchemist' by Paul Coelho. 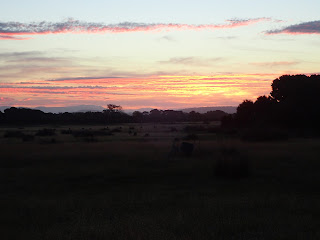 The next morning I plodded up the Point Vision track that ends on a ridge.  Turn left and after about 400 metres the summit of Point Vision is reached, views are better if you carry on North down off the high point for a while. 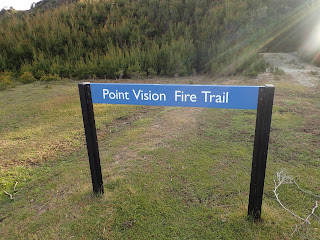 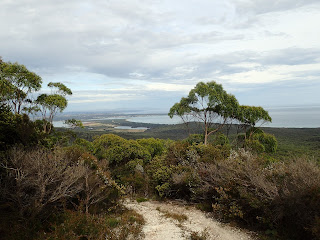 I turned right and followed undulating fire trail through my one of my favourite areas of forest in Tasmania; huge stringybarks and distant views lead to the junction of the Dazzler/ Briggs Link Fire Trail and a nice wander to Browns Creek Road, an unsealed access road that runs between the West Tamar Highway and the entrance to Narawntapu National Park. 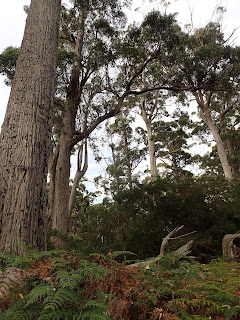 In windy conditions I usually take a wide detour around near the road entrance as there is a fair bit of illegal asbestos dumping in the surrounding bush.  No wind today so I held my breath and snapped a picture.  I really hate any abuse of our natural environment but especially this kind of bogan stunt. 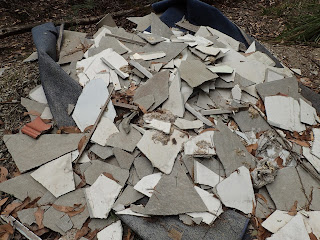 Sadly, this is a very common site around the Beaconsfield area.  I don't know what the answer is, and I hate the 'lock up the land' mentality but there is a large amount of dumped asbestos around Tasmania (and the mainland judging by some news reports for example here) originating from DIY home renovation projects and the wind blows and the material breaks down and we all breath it. 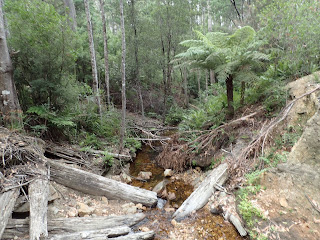 Another few hours of winding along hilly fire trail by myself all alone on a Sunday and I popped over a rise near the back of my property and raided the refrigerator.  A fantastic, relaxing weekend hike. 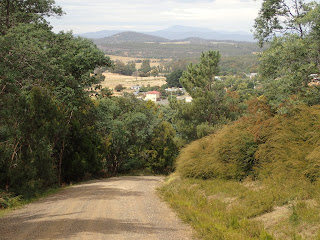