Higgs Track to Lake Gwendy along the Ritters Trail. 47km out & back. 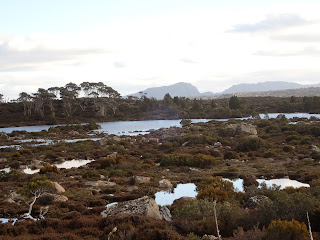 I started up the Higgs Track again a week after I last visited.  The hoard of resident wasps in the car parking area don't like folks with full packs hanging around idle and relaxing so it was a quick skidaddle up to Lady Lake Hut where a bit of track work along the way looked like it was in hiatus for the Easter weekend break. 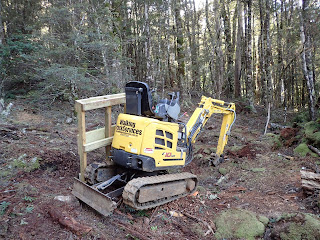 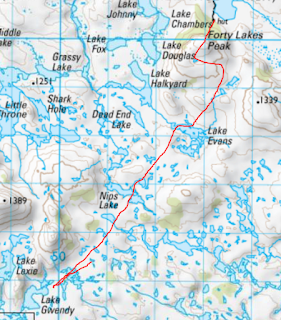 The route I took in red from Forty lakes Peak to Lake Gwendy and second night campsite.
Map: Meander 1:100000 Topographic sourced from www.tasmaps.com

The track to Ironstone Hut swings out over the rocky rise near the long drop toilet, from there it's an easy wander up to Westons Lake & Lake Lucy Long.  I can't really overstate the beauty of this area, on a clear day like the Friday I was a kilometre above sea level and it was pure magic. 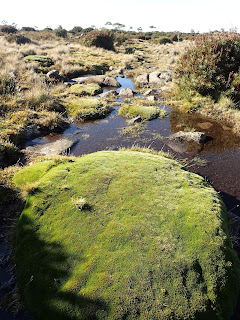 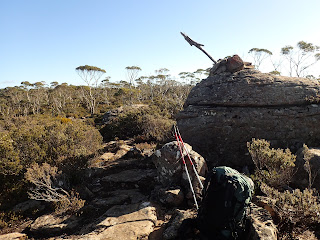 The walking is simple, mostly free of forest and no hassle.  The odd stream to cross, a prickly scoparia bush to circle around.  I was keen to nab a campsite and sit tight and smile so when I spotted a flat patch on Westons Lake it was on.  I snuggled down into my sleeping bag and made tea in the outside vestibule of my tent and re-read Eric Newby's classic, 'A Short Walk in the Hindu Kush' and it was bang on really for other worldliness and escapist narrative.  An adventure that might be difficult to replicate in today's 'connected' and politically fractured world perhaps.  I think the last time I read this book was hiking the Annapurna Circuit in the Himalaya about 10 years ago or something but I remembered zip.  Probably due to the altitude and those magnificent, gargantuan mountain surroundings. 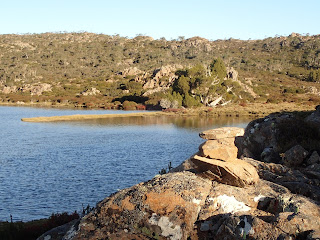 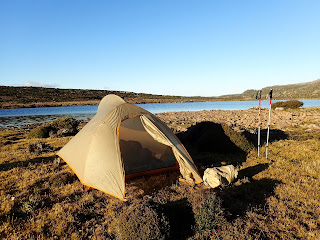 Westons Lake to Lake Gwendy and back to stealth campsite- 20km, Saturday 15 April. 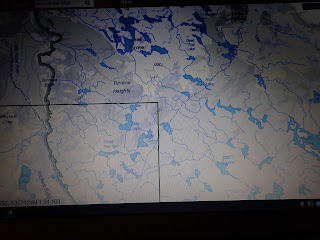 I used this sketchy photo of an overview map on my camera to guide me to Lake Gwendy.


I woke to a frosty wee morning and stood stamping my feet watching the sun rise, willing it on to appear in the East...please! Heat is good! I thought all that Wif Hof breathing method hoo ha and cold showers I drag myself through every morning at home was supposed have had a major effect on my tolerance for freezing temperatures, right?!
A guy with big boots and a fly fishing rod wandered over and apologised for disturbing my quiet time. No probs mate, you didn't.  Mitchell was a local chap from the Deloraine/ Mole Creek area up for the trout and had stayed in the nearby hut at the other end of the lake.  I had no idea there was a hut because it wasn't on my crappy map.  More about my crappy maps or lack of them later.

I packed up and followed the braided path to the Southern shoreline of Lake Nameless. 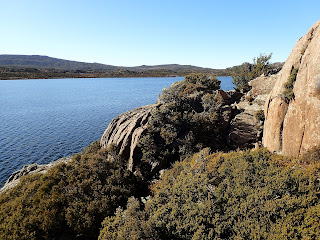 I was nearly round the lake when I bumped into Jacob & Miranda from Hobart. They were on the outbound hike from a night in Ironstone Hut with fly fishing rods hanging over their shoulders.  I was getting the jist that the attraction up here isn't just the scenery and wide open spaces; fishermen (and fisher women too mind you) seem to flock to the central plateau for the sport.  I had a peek in the hut and flick through the visitor journal, it's pretty cosy and quite rustic cool- it was still stoked up warm from their fire that morning and various party people had left plenty of crap in there.  If anyone has need of 4 of those cheap Coleman type car camping gas cookers that take the cylinder canisters- jump up to Ironstone Hut sometime soon and help yourself. 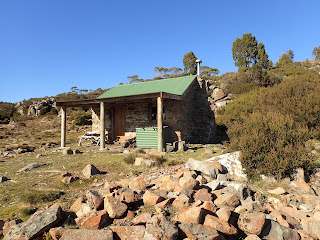 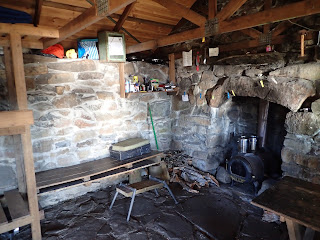 I had a vague plan to follow a line on a map I saw on a website, called the Ritters Track that sort of leads out from Lake Nameless in a Southerly direction to the edge of the Walls of Jerusalem.  I didn't know where the 'trail' started or if the cairns that I had read about were even for real.  I figured though, with 3 or 4 days at my disposal and a fine weather forecast I had nothing lose and plugged my way up Forty Lakes Peak behind the hut for a good viewpoint and somewhere to start.  A rough track through eucalyptus forest, cairned along the way, leads up Forty Lakes Peak and then you're at the top.  That's it. 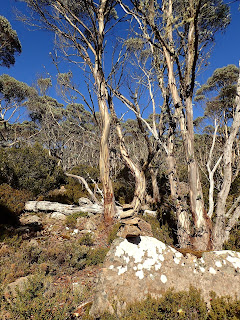 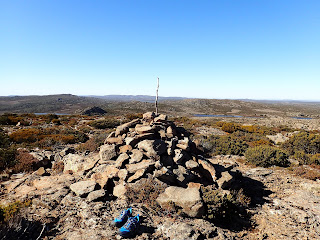 There is a few bars of Telstra mobile signal up there too if you are into that kind of thing.  I headed East and wandered off the hill, aiming for a distant lake, hoping I would hit one of these mythical cairns that had been constructed over 100 years ago to guide stock men from the Meander Valley to grazing grounds in the Walls of Jerusalem (yes! Grazing grounds.  Cows.  Walls of Jerusalem. True story.  No shit.)  Simon Cubit explains the story well in his excellent informative blog entry here.
UPDATE: Since Simon's passing in May 2017 his website www.simoncubit.com.au is no longer accessible.  It was immensely helpful and I appreciated the effort he went to producing it. 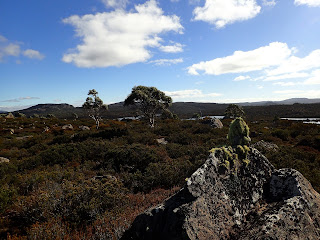 And waa-lah.  I stumbled on one.  A lichen covered tower about head height composed of four or five large rocks.  And the I sighted another a bit further on in a Southerly direction.  I was off. 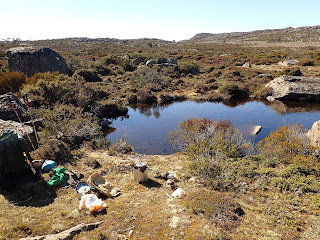 Among the hundreds of tarns and ponds one took my liking and I plopped down for a hot cuppa and lunch and quietly observed my surroundings.  Kangaroos, more like Foresters or Eastern Greys than Bennetts Wallabies, with light brown puffy coats rocketed around everywhere.  Firm cushion plants are commonly sighted as are the bright red berries of Spreading Cheeseberry and I saw numerous Pencil Pine trees perched on the edges of lakes and small green Mountain Rockets with their red seed capsules flapping away in the breeze. 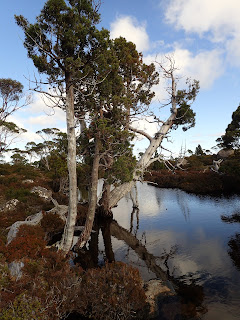 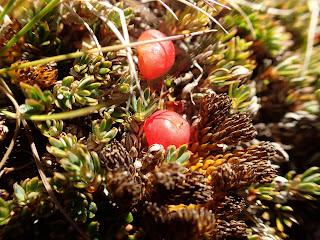 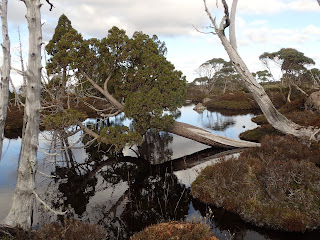 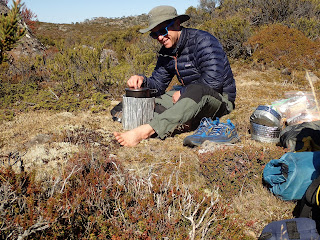 Cracking onward, a few ups and downs were encountered but nothing extreme, most of the terrain is level and the familiar peaks of Mt Jerusalem and the Walls area drew closer.  I didn't exactly follow every single cairn marker as I had my direction zeroed in on a South South West setting and the sun was out shining the skies, but it was reassuring to see these old stone beacons showing the way as I had no map of the area South of Forty Lakes Peak except for a hastily snapped pic from a 1:200000 overview map on my digital camera.  Dumb, I know.  I managed to bring spare batteries for the headlamp but left the map of the bit I had never ventured to, at home.  Anyway, I kicked on till late afternoon when the wind picked up and clouds rolled in grey and glum. 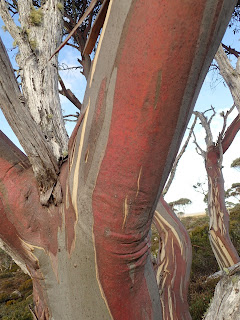 What I quite like about pottering about this part of the planet is the feeling of genuine isolation and wilderness.  I remember hiking the Southern desert section of the Pacific Crest Trail back in the day and seeing the  sky continually criss crossed with white jet streams as immense numbers of aircraft zipped their way across to distant ports.  Nothing wrong with that of course, I'm just having a renewed appreciation of the remoteness of my home state lately I spose.

The rainfall metering weather station of Lake Gwendy popped up over a hill (shattering my preconception of remoteness, ha ha!) and I was 16.5km away from my mornings campsite.  The cairns seemed to go in various directions from hereon but I was done heading in this direction for the day and I backtracked for an hour to a nice tarn I spotted earlier and parked the tent for the night. 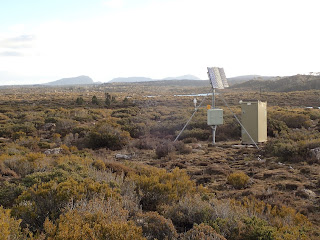 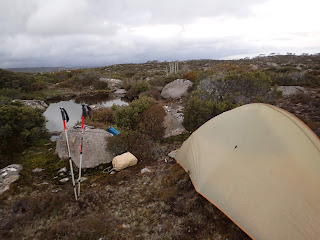 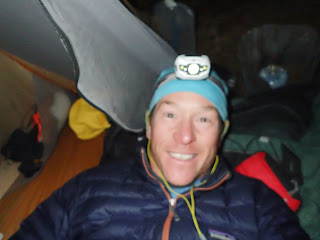 It was a warmer night, however my camera called it quits- battery flat, so no more pictures the next day. Actually the weather took a 180 turn and I was more interested in warming my hands than taking pretty happy snaps.  I knew where I was heading and had a compass so the cairn markers were less important today, and what I had repeatedly heard is probably rightly true; getting caught out here in a total whiteout would be exciting.  Especially worrying if you were a newbie on your own.  But the visibility, although marginal was doable and I stamped over the back ridge behind Ironstone Hut to Lake Nameless and picked up the trail back to Lucy Long Lake and Westons Lake.

There were kiddies and goretex clad Mummies and Daddies running around Ironstone Hut and I met a big boofy bloke with a sports kit bag over one shoulder and a puppy in the other who informed me he had the flu and with that his lady friend with the fishing rod and himself pattered off towards the hut and the energetic rug rats scurrying about.

The rain came and went and I nearly staked out a campsite on Lake Lucy then thought better of it and decided I had had a good run of it this weekend and headed for the car park instead.  The temperature was ten degrees warmer in Deloraine and I was back in a different world.  Not my preferred one, but the one that is necessary to occupy for a while to get back to the fun one. 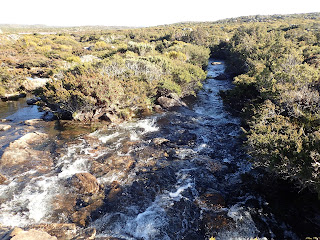 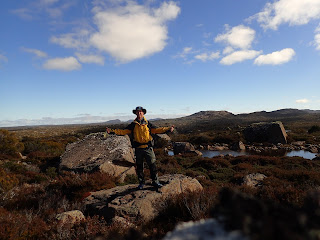 So what this brilliant little weekend hike has done for me... is open up a plethora of possibilities and missions regarding walking in the high parts of Tasmania.  I can get up onto the Central Plateau with a fine or mostly fine weather forecast and take adequate clothing and equipment (depending on the season of course) and anything is possible.
I'm not such a fan of endlessly bashing through thick scrub for weeks on end so some areas of Tassie don't float my boat for a long haul, just good for a few days tops.  This open plateau walking thing is a whole different experience though.
You know, I reckon I am destined to have some rockin cool times up there where I can wander free and unencumbered.
I might just remember to pack a map next time though.