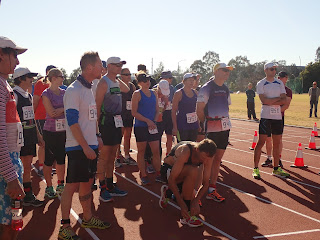 It was Saturday 10am and the freaky fringe element of an already fringe dwelling sport lined up on the starting line of the 400 metre track at Campbelltown Athletics Stadium for a weekend of rotating around an artificial turfed surface for as many times as possible in a 24 hour period.

The difference between timed track events and point to point or looped distance Ultra-marathons is that you can pull the pin any time and you do not have a set distance to gauge your result.  The goal of many, myself included, is to go the whole 24 hours on the trot and see how many laps of 400 metres you can slog through and not blow up.

I was having a second bash at the Sri Chinmoy Sydney 24 hour track race.  A permanent Winter fixture on the Ultrarunning  calendar in the South West of Sydney, I had set the bar lowish at 160 km (100 miles) last year & easily reached that target.  I was punting for roughly 185 km this year or at least a finish if that goal went to shit.
2 and half laps is 1 km so that meant many, many tedious laps of Campbelltown Athletics Stadium.

No 'race' as such for me this year though, I was only competing against myself and enjoying the camaraderie of other Ultra nutters.  Mostly over 40's and not fussed with fashion or style.
My run did indeed go to shit but I hung in there gutting it out and here's what happened. 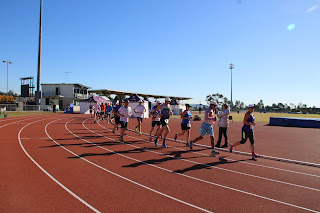 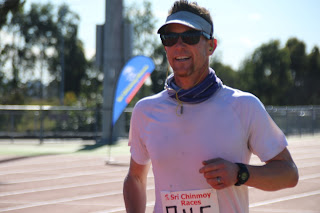 I cracked on at about 10 km an hour pace for the first couple of hours under a shining sun and blue skies until the 6 hour runners kicked off at 12 pm.  Some of the boys and girls participating in this category were hard out sprinting, making those of us doing the big dance look a tad geriatric.  I know from hard earned and at times, miserable experience, that going out too hard in a 100 mile race or 24 hour event can yank the wheels off later on.  It's about conserving energy and holding back a bit.  And thinking of that hot shower and cold beers at the end. 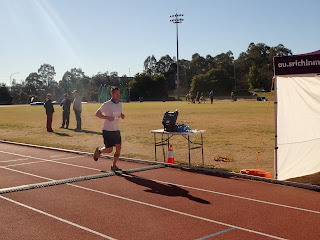 The Sri Chinmoy volunteers put on a fantastic aid station (every 400 metres!) with great vegetarian food stuffs and cheering aid station crew.  As in cheering: Every. Single. Time. I. Went. Past.
For the whole event.  Serious energy and good vibes from these lovely folk while we kept spinning around the oval while cars droned by on the highway and the train from Sydney rattled past occasionally.
A super large TV displayed my name and number laps and total distance, under the supervision of legendary Aussie Ultrarunner Martin Fryer.  Look him up, this guys the real deal. 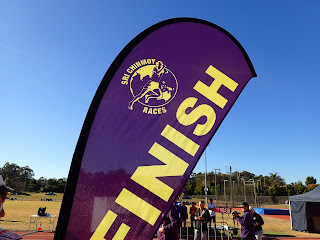 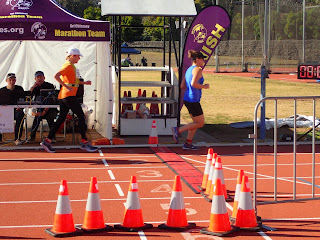 The 6 hour punters finished up at 6 pm and the rest of us that were left charged on.  A chill crept into the air and the heavenly 17 degrees we enjoyed during the day switched to single digits and the flood lights sprang to life and the full moon and stars beamed down.  I was feeling a bit rubbish with the runny shits and and for the first time ever; an upset stomach.  I never have this issue that messes with so many other runners but a few quick trips to the toilet were needed.

Then my right hand glute played up and the calf started to twinge.  Brilliant.
I work a fairly physical job at present in a vineyard that leaves me aching most days.  I can only surmise my running was affected by all the repetitive tasks I do 5 days a week.  Bloody work. 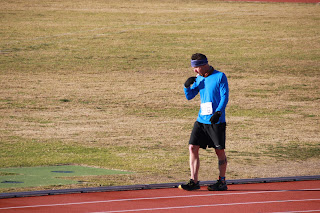 I haven't got any night time pics so that's me brushing my teeth the next morning as I keep on keepin on.

A few mad buggers cracked on at 10 pm as we approached half way through our run, they were contesting the 12 hour race.  In my book that has to be one for the diehards- starting a run at 10 pm. Much respect.

After a while I found it far too painful to run so I swapped out shoes.  That helped for brief period where I rocked out 12 km an hour for 90 minutes then was forced to a demeaning walk for the remainder of the event.
It sucked. And it was crazy cold.  I seemed to cope better than most for some reason, maybe my Tasmanian lifestyle helped?!  Many runners rugged up like the Michelin man and jumped in a sleeping bag and rested for a period to warm up.  I was severely tempted to do the same but realised that if I did it was game over and I would never get going again.  It was fight the fatigue and embrace the minus 2 temperature on a Saturday night.
The 2 leaders keep up their unbelievable pace while most of us shuffled/ walked/ tried to run until the sun popped up and melted the thick frost covering almost everything in the stadium. 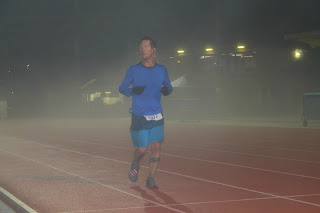 This is from last year, 2016.  I was cutting through the fog and actually sort of running.  It was painful and I didn't learn a thing and I signed up again for more of the same.  Sucker for punishment.

10 am Sunday morning rolled around and the support crews had pulled down their tents and packed away the chairs.  I bowled around a the last few laps with a bloke named Arthur and we finished with the same total distance; 154 km.  Quite a bit less than hoped for but I never stopped or sat down.  Except to poop.

A brilliant badass event that asks everything of you and has the coolest atmosphere and organisers on the planet.  The volunteers even sang 'Congratulations' to all of us at the award ceremony.  After staying up all night cheering us on, feeding us, encouraging us and dealing with our roller coaster of emotions.  Legends.
I cried a little.  I felt invincible at times.  I was sick of the sight of the brown/ orange track.  I looked forward to the thrill of changing direction every 4 hours.

Thinking I might do the 6 hour or 12 hour next year and let the legs fly a bit. See how I go. 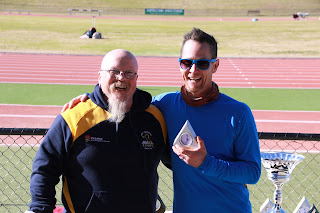