How does a super safe destination with polite, friendly people and kick arse food served on a mountainous tropical landscape half the size of Tasmania  sound to you?

There is hiking, wilderness and easily accessible interesting aboriginal culture to explore.
Good roads, uber schmick  trains and costs approximately half of what we pay here in Australia.  Which wouldn't be that hard to get excited about really as Aussie is a seriously pricey place to live and travel throughout these days, and that sucks the fat one.
But enough Australia bashing- my trip to this portion of North Asia was a quicky and a goody; 8 days on the mystical island of Taiwan.

A no brainer- a 'civilised' squeaky clean Asia, kinda like a cross between Singapore and Japan.  But easier and less bewildering.

That's the intro, lets crack on. 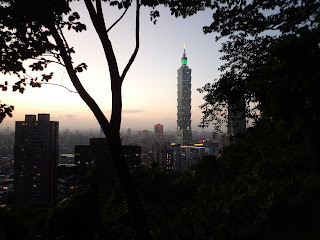 Population- 25 odd million last count.  Mostly of Chinese descent with a small number of indigenous folk that are related distantly to Polynesian wayfarers.

Topography- no real swimming beaches to speak of except down the far South end where some of Life of Pi was filmed.  Crazy wave action, 4000 meter mountains and an ever gurgling volcanic geology contribute to a sheer sided, earthquake shifting, jungle coated hum dinger of an island.
Most of the population lives on the flat, heavily urbanised West Coast facing China while the East Coast is green and wild and well worth the effort to get there.

Transport- Sweet!  Mostly good roads except the ones that get smashed and wiped out during earthquakes and devastating typhoons.  Rail system is on par with Japan and mainland China I reckon.  Do what you know is good and take the train.
Puddle jumper flights are available to most major cities but perhaps unnecessary unless heading to an off shore island.  MRT rail throughout Taipei rocks!  Like Singapore but even politer and better, if that is possible.  Scooters are ubiquitous. Look that adjective up if you don't know what it means.  And maybe look up 'adjective' too if needed.

Safety- No crime.  Well none that affects tourists anyway.  Saw a few drunk old guys near the Longshan Temple in Taipei and they waved and smiled and said something in Mandarin or Taiwanese that I'm going to pretend was very encouraging and kind.  That was about as scary as it got.  Except for the nutcase bus drivers.  Very law abiding folk are the Taiwanese. No one attempted to rip me off and most people were super helpful and polite and I love them for it.  Nuff said.

Money & Costs- the Taiwanese New Dollar (TWD) exchanges about 23 TWD for 1 Australian dollar.
A can of beer was about 30 TWD at a 7/11, reasonable hotel room 1600 TWD, basic, tasty Chinese or Japanese meal 200 TWD.  As I said before (I did you know), I found day to day travel around the island of Formosa about half the cost of Australia, comparatively.
But you are substituting $5 shonky meat pies and deep fried canola coated carbs for fresh vegetables and tasty, succulent fare, yum!
I thought it was a good deal but if you are coming straight from South East Asia it may bruise ever so very slightly.

Language- Mandarin & Taiwanese.  A bit of English spoken, plenty of signs in English and heaps of locals thankfully knowing the rudimentary basics of our messy language- you will get around and not starve to death or crumple in a weeping heap on a hot humid West Coast highway.  Most of the tourists are from mainland China and I found sighting a Caucasian or African person quite surprising but there you go.

*I used the Lonely Planet guidebook, 2017 edition.  Really good.  The last couple of trips I have been on, I have ended up binning whatever LP guide I had out of frustration or boredom- they often just seem like a pointless badly written waste of space but this one was helpful and much needed, I found.  Recommended. 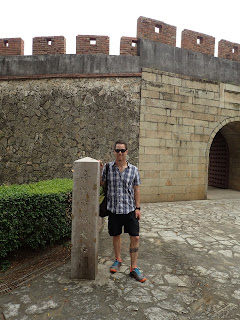 I flew into Taipei from Launceston, Tasmania first up to Melbourne then on Air Asia swooping into Kuala Lumpar for an overnight and onto Taipei, capital city of the Republic of China; (ROC) Taiwan.  We won't get into the politics of the 'real' China because that stuff hurts my head and that's just what they call themselves but the return ticket cost about $500 AUD.  Good price.
8 hours Melbourne to KL.  5 hours KL to Taipei the next day.  Bring your own water, it costs a dollar a bottle. Air Asia. You get what you pay for and you often pay very little.

After customs the MRT express train (purple one) is easily found via the numerous signage, cost was about $7 AUD and whisks one into Taipei Central in about 35 minutes.  I stayed at the very kitsch Bee House hotel a short stroll away down a side street.  Tight space in the room but very friendly, welcoming staff and nice breakfast and little stuffed bees everywhere. 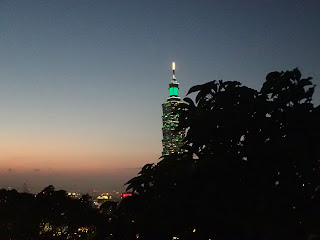 Hoards of fellow tourists were discovered just before sunset ambling up the steps to the lookout on Elephant Mountain to get a classic view of one of the worlds tallest buildings- Taipei 101.  I totally recommend this oft taken, sweaty and crowded pilgrimage and when you bop back down off the mountain, the food court in the base of the building has great Japanese eateries and cold beers.  Promise.
Train station on the red number 2 line heading East is labelled Xiangshan/ Elephant Mountain in English.  Simple stuff right, even I worked it out.

Get an Easycard or Taipei 2 or 3 day pass from most MRT stations and then getting around is swifter and cheaper than purchasing a plastic token for every trip.  Signs and announcements are in English and fellow traveller's are super polite and placid even when the carriages get jam packed. 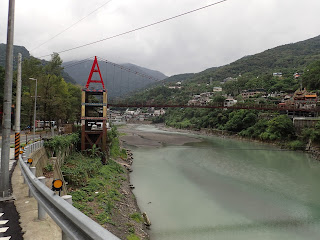 Wulai is a mad little mountain/ hot spring/ river town with a mostly indigenous population just South of Taipei in the rainy, humid jungle.  It is reached by train then a local bus and I padded around the main street and found a friendly cafe to tuck into some lovely greens and pork and fish and prawns.  Simple Aboriginal food like wild boar sausage on a stick is grilled everywhere and the road leads out to Wulai Waterfall. 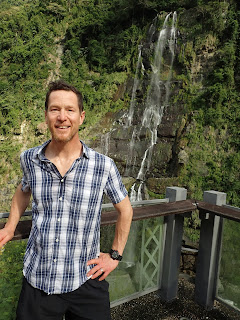 Next day it was back to Taipei, hopped on the High Speed Train to Tainan, jumped into the first major hotel restaurant across from the train station and experienced full gluttony reigning supreme at a traditional Taiwanese buffet.
Forget the scenery swirling by at 300 km/hr, ignore the fact the High Speed Train station is miles and miles from Tainan itself and requires a super slow slow local train to just get there...I have never seen so many crabs piled high nor so much seafood grilled and blasted with heat.  The deafening buffet crowd of hundreds of carnivorousness punters devoured pretty much most of the oceans organisms and murdered a large ice cream selection.
I was kind of traumatised but sated.
I felt bad, bullied but very full.
And then I checked into my hotel room; The Kindness Hotel.  Truly.  That is what it is called I shit you not.  Good sized room with Japanese electronic toilet with all the wizz bangs squirting up your bum, shower with 8 heads pumping hot water, late buffet dinner and buffet breakfast and all you can eat anytime cheesecake and ice cream.  Free laundry facilities.  I put on 2 kg on this trip, seriously.  And I don't usually eat sugar or junk but there you go. 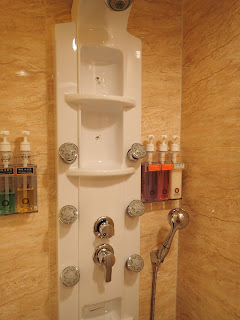 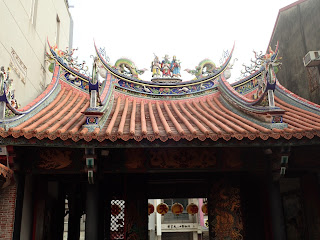 There's a really tranquil little temple right next door, dedicated to a long gone emperor.
In fact Tainan is chock full of temples and I did a fun day long urban hike hunting down some of the more obscure and sexy ones. 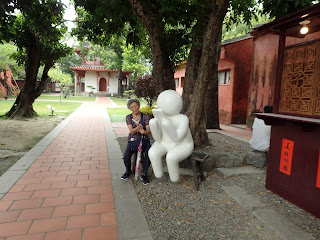 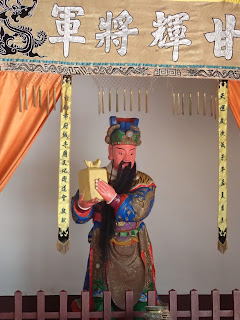 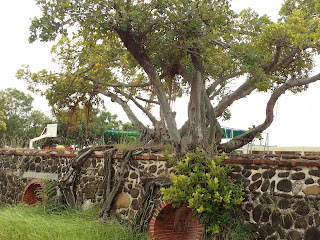 Couple of days in Tainan and a day long rail ride to Taitung where I had a breather and lunch and a bit of a wander around an archaeological site before being whisked away to Hualien on a muscular train covered in teddy bears. 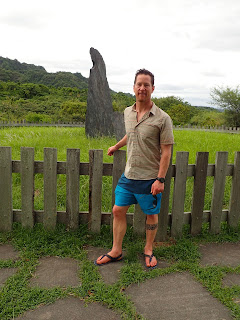 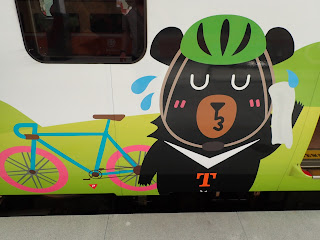 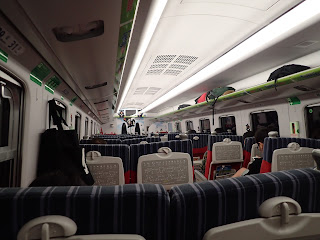 Cool scenery was gawked upon in what is called the Rift Valley. 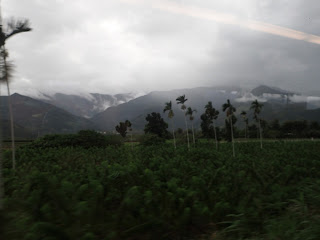 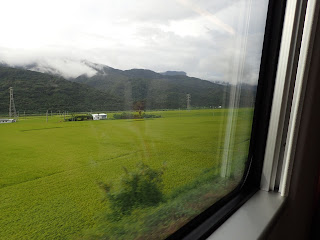 Hualien is a fun spot, I stayed at the again very feminine and kitsch Meci Hotel which had the theme of snails.  Not bees or kindness this time mind you, snails.  Loads of free sugary goodies of course and the sweetest staff, (pun intended and I mean it- they were on the ball), it is down from the train station and round the corner from loads of convenience stores and eateries. 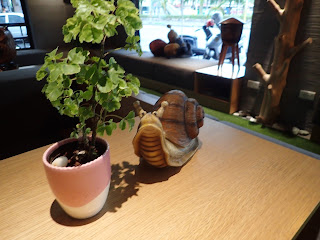 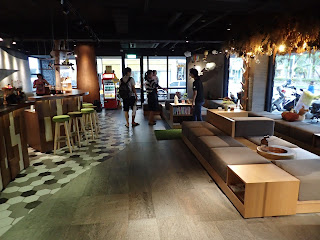 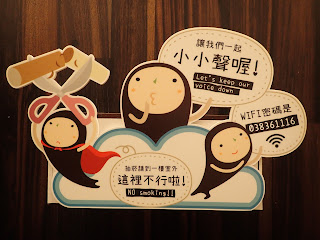 I had quite a few fantastic meals in Hualien.  There is a strong Japanese influence in Taiwan and Japanese cafes and restaurants are common as chopsticks.  Actually, if you don't use chopsticks regularly you will when you get here.  Never saw a fork or spoon.  They might be banned or something. 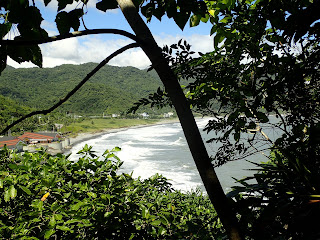 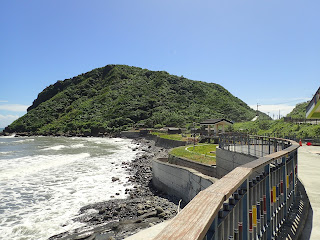 One evening I went to the 7/11, purchased a big bag of beer in cans and sat outside in a public park (sounds seedy doesn't it?) and people watched (not what you think, just keep reading).

Best thing was when the rubbish trucks came mooching around just before sunset but do you think I thought they were garbage trucks?? No!  The Mr Whippy ice cream tune theme was blaring out!  If you don't know the Mr Whippy theme it's kind of a melancholy, slightly sketchy piece of music that is universally known in Australia & New Zealand to make shitty little rugrats cry with outrage when Mum or Dad or both shake their heads and decline little Justin or Jennifer's request for a treat from the ice cream truck.
The garbo vans play it!  How soothing! Trickery? Brilliant. 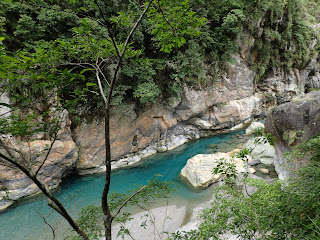 Taroko National Park is touted as the big banana, the real deal, the main attraction in Taiwan.  It attracts loads of people and it's awesome.  Really.  I took the hop on/ hop off suicide bus and had a blast exploring the twists and turns and tucked away surprises of this delightful protected area.

Recommended even if you hate crowds as much as I do. 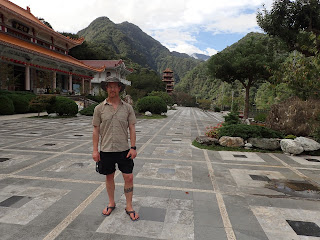 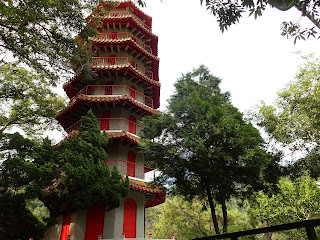 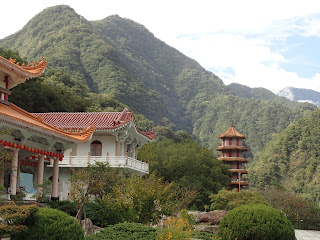 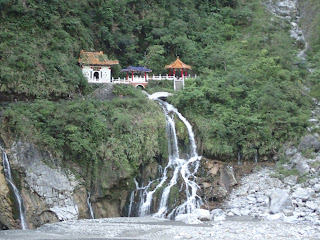 The train back to Taipei took a few hours and the mass urbanisation and concrete swept in rapidly.  My plan was to circumnavigate the island wholly by rail and I did that.  I had shunned the numerous night markets as too much hassle but I had to check out Taipei above ground in the nitty gritty and see what was the go.  So I stayed my last night in Ximen.

Another kitschy hotel with girly wallpaper and yummy breakfast noodles.  Loads of stalls and shops and stuffed toys and bright lights but very tame.  Like Bangkok without all the crooks and hookers lurking round. 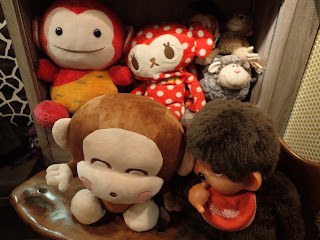 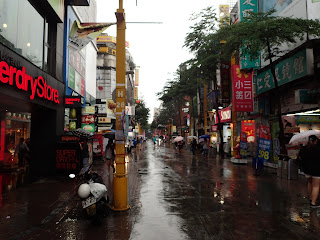 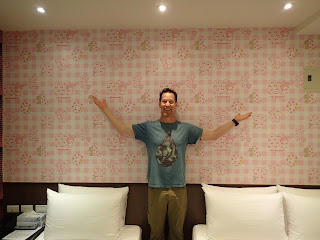 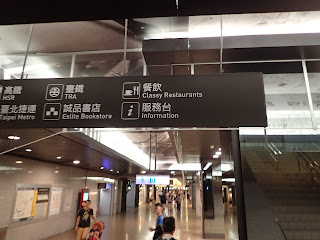 Thank you Taiwan.  You are clinging on by your fingernails for survival and I truly hope you hang around for a while longer so I can duck in for another visit.  A very under rated destination.  There are some large hairy mountains that need climbing and I didn't spend nearly enough time sampling the craft brew scene.