5 Books I really got into this year: 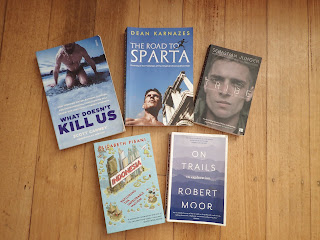 What Doesn't Kill Us- SCOTT CARNEY

Average man becomes a fricken rockstar.  Truly.  Due to Scott's easy to read recollections I spend 15 minutes a day every morning doing a silly Wif Hof deep breathing/ breath hold/ cold shower routine because of this book and it feels great... I didn't get sick at all in 2017. Nothing. Solid immunity, positive mindset.
Wif Hof! Works for me.
If you like Chris McDougall's 'Natural Born Heroes' & 'Born to Run', this is in the same vein.

The Road to Sparta- DEAN KARNAZES

In my opinion this is Dean's best writing yet; a mix mash of Greek mythological history, personal memoir and trail tale.  You learn the fabled Spartathlon Ultramarathon is set along a greasy polluted road for much of it's route and Dean found ancient nutritional ideas don't necessarily make for the greatest gastronomic endeavours. You rock Mr Karnazes!

This guy knows how to write, and although just a slim volume- it kicks arse.  I enjoyed the first quarter the most that detailed how White settlers in the US 1800's abscounded to live with the local Indian tribes. How cool does that sound?!  Do humans really function better and feel happier during wartime when something worthwhile is going on?  Your call.

Elizabeth is in a different world from most of us.  Hardcore traveller.  Happy to be stared at.  Comfortable waiting for a flight to scoop her up... waiting for days at a time.  Knows the history and dodges the stitch ups.  She flits around the many islands of Indonesia, nicely skipping Bali (noticeably actually) and painting an honest picture of everyday humdrum life minus the tourism brochure make up and slick photography filters.  Makes you want to jump on a flight to Jakarta right now.  And no one goes to Jakarta...

On Trails- ROBERT MOOR
The author hiked the Appalachian Trail in 2009, same year as I did.  But in the wrong, I mean opposite direction.  (He went with the herd, Northbound, 'sigh') Robert gives a charming and broad history of the how, why and who of paths and formation of trails, from interpreting colonies of ants to ancient Indian clans and their relevance in our understanding of why the hell do we follow the paths we see and not just blaze our own trails??!

3 Films that deserve a viewing over a dandy brew or 2: note: not necessarily 2017 vintage, just ones that motivated me to remember life is not just about struggling to pay the bills and sedately towing the line, when I forgot from time to time.

Bit of classic adventure flick- man chases the path of his heroes Yvon Chouinard & Doug Tompkins, meets hottie Easter Island lass and gets stuck into plenty of sailing, hiking & climbing.  It's been around for a while but comes across as timeless.

Wandering along the Amazon for years (yes, years) and making it out alive after dodging drug runners, exciting animals and what must have been bloody hard yakka is surely a supreme test of will and dedication.  This guy is a fuckin legend, no arguments thanks.
And there is virtually no whinging in this flick.

A slick Mountain Outpost creation. Watch it on Youtube here

No Jam Jam (Jamil Coury) in this one, just some mad buggers that live in the Rockies who know how to have fun. If you have ever had the pleasure of chugging 4 beers in between 4 laps of an athletic track in under 10 minutes you will probably watch this more than once.  And it's great to see the mighty Jim Walmsley having a hard go of it! 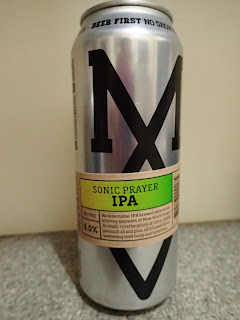 This citrus infused 500ml can of WOW, fuck me, that's awesome!...is my choice for brew of 2017.  Entirely personal opinion and taste of course but at $30 AUD for a pack of 4, 500ml it isn't cheap but I promise it isn't crap.  Definitely not.  New South Wales is pushing out some great craft beers and this just proves my point.

If anyone is keen on a book featured here give me a holla; safarihiker@gmail.com