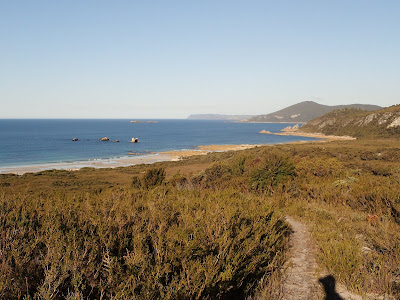 Rocky Cape National Park is a smallish chunk of land, around 30 sq km, situated on the lonely North West coast of Tasmania.  A meandering thread of trails criss cross this protected parkland, racing over round hillocks and winding along white sand beaches and tough quartzite rock strewn coves.

I didn't find the inland landscape especially stunning but then maybe I am a tad spoilt and jaded at times living on an island with many fantastic areas to hike and be astounded by.
Rocky Cape is quite lovely though and worth a look.  I recommend doing the 16 km circuit walk  starting with the inland trails first and hitting the coast, the 'evenement principal', at the end. 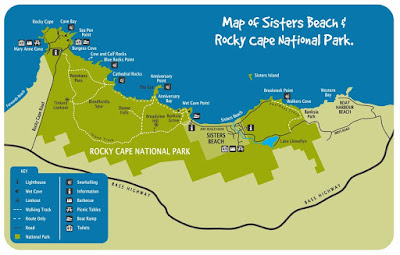 Getting to Rocky Cape NP:

I drove, taking around 2.5 hours from Launceston with a get-out-and-stretch-stop on the way.
Jump on the highway from wherever you are, head to Burnie, muggle your way through the traffic lights and cruise the final 51km from Cooee via Wynyard on the Bass Highway and hang a right at the Rocky Cape Roadhouse.  Buzz up the gravel road for 5 km and the parking area and sign posted walks are waiting for you.

As far as I can tell from doing a brief online search there is no public transport out to this part of the island so car hire or hitching are your options if travelling around Tasmania sans vehicle.  Or cycling.  But ensure you are cool riding on skinny roads with little shoulder and don't mind huge logging trucks flying up behind you. 😃

If you have a vehicle you will need a Tasmania National Parks pass.  It's a bit pricey, check it out here.
Even though it's a National Park, there is no camping, either backpacking or car based allowed. 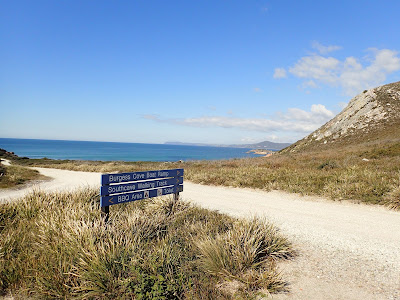 Safari track rating:  Easy. Narrow sandy well marked singletrack rolling over low hills (inland) and along rugged sharp tilted rock (coastal).  Some nice views and changing vegetation breaks up the hiking, can be a bit boggy and sodden after rain. 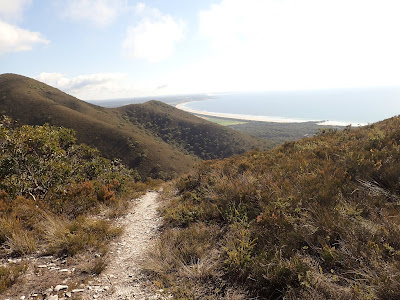 The trail pokes inland and heads up straight away, revealing views of Black River Beach and The Nut (a flat rectangular rock outcrop) at Stanley.  I passed a super smiley family of 4 on their way down and then I was on my own as per usual for the remainder of the day.  Flora is mostly low growing heath and tea tree.  Some banksias and gums can be found in the valley's and more protected spots.  Of course the prolific wattles and she oaks are sprinkled around the park too.  The usual suspects on the North Coast of Tassie. 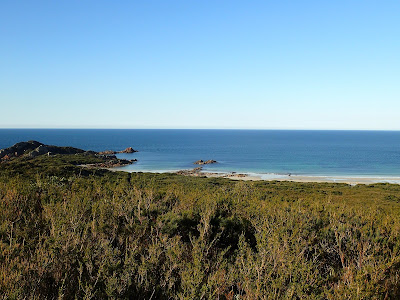 After passing over a couple of significant way points; Postman's Pass, the turn off to Tinkers Lookout and the high point of the Sister's Hills to the 8.5 km mark, the track swung North wards and the vast expanse of the deep blue of  Bass Strait occupied my vision.  I dropped down to sweet Anniversary Beach, with squeaky powder white sands. 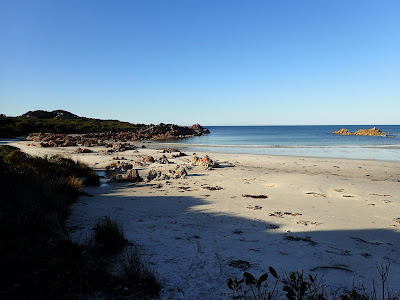 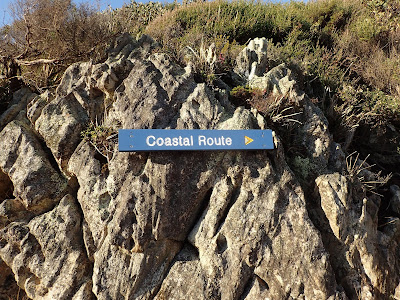 Heading North West along the coast for 2 kilometres, I rock hopped over and around the near vertical tilted up quartzite rock platform with the odd stream crossing and speck of sandy beach.  Plenty of sea birds flew around and various marsupial tracks were spotted on the sands. 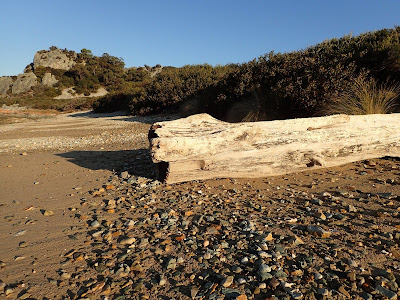 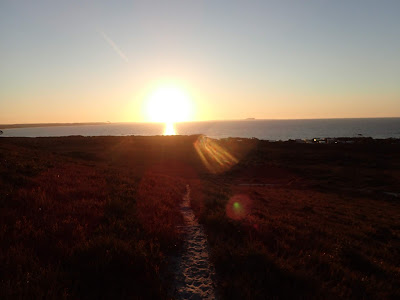 I had left it late in the day to start this wandering around so as the sun went down I got a wriggle on and jumped on the track heading inland back to the car park and enjoyed the last of the sun's rays on this beautiful wind free Winter's day. 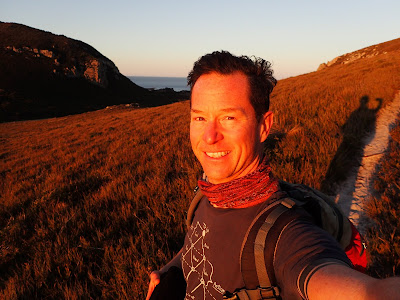 Another family, almost a carbon copy of the first one from over 4 hours ago was heading up the start of the trail as the light faded, Dad in the lead clutching a fist full of beers.  They cheerfully yelled at me how spectacular they thought the sunset was and that they were having a picnic dinner with a view.
Cool family!

I skidaddled off to Black River Campground up the road and chucked up my tent and got a wee fire going with the kookaburra's cackling away and waves crashing in the distance.
The coastline of the North West is seriously lush.
Go see it. 😉
Posted by Sean 'Safari' Smith at 14:28