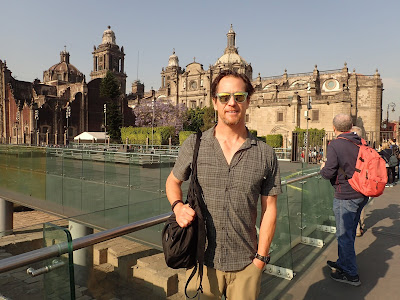 Try fun, very loud, pulsating and as for the chow- extremely tasty.

I travelled around the Mexico City local region in March 2019 with my girlfriend Ree.
We speak around 4 words of Spanish between us.
We utilised public transport and Uber share rides and walked as often as possible.
I ate many delicious tacos and drunk copious quantities of good, cheap beer.

At the time I travelled the region 1 Australian dollar (AUD) was around 14 Mexican pesos (MXN) or 1 United States Dollar (USD) to 19 MXN.

Our cruisey sightseeing journey took us on a triangular circuit starting in Mexico City to the pyramids of Teotihuacan then onto Puebla and Cholula and back to Mexico City.

I dropped into Mexico city via Honolulu and Houston after 10 hours in the air and quickly cleared customs before jumping in a pre paid cab.

Fill out the form the flight attendants give you on the plane and hang onto the bottom bit that is handed back to you by the customs officer- you'll need it on the way out of the country and there is a bit of a fine and finger wagging if you can't produce it pronto. 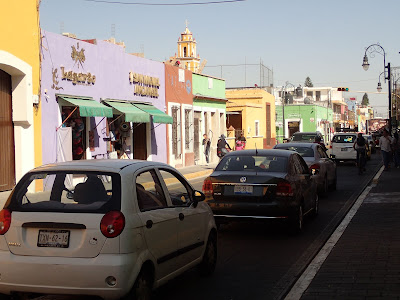 There are loads of booths selling pre paid taxi vouchers to any destination after clearing customs and collection of baggage.  Cash is king here.  The cost was 220 pesos- around $16 AUD- for a 'saydan' (sedan).

I stayed a couple of nights at the budget and centrally located One Ciudad de Mexico Alameda in the historic district.
Cost was around $90 AUD per night including a good buffet breakfast.

Right slap bang in the action and crazy noisy during the wee hours- try a super loud mariachi band rarking up at 1am right under your street facing window with 20 million partying punters and the authentic Mexico experience is a reality.

Regardless of whether you wish to sleep... 😉

Ree had already rolled into Mexico a week earlier while I was plodding around the hills of Oahu and had sussed out the sights, what was where and how things worked.

I don't ever usually pay someone to show me stuff I can see perfectly well myself but in this instance I am mighty happy I did.  We actually had a blast and I got much insight into the cultural history and workings of one of the planet's largest metropolis. 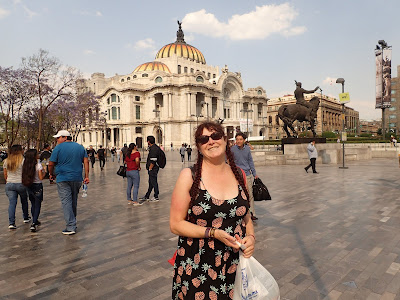 6 of us dorky tourists were under the charge of Julio, a really cool guy in a red Intrepid t-shirt who lead us all over the historic centre and treated us to a diverse variety of architecture, freaky eateries, and local markets.
All the greatest hits. Great lunch at a taqueria too.

The day finished up with a chill time at a gallery dedicated exclusively to one mural by Frida Kahlo's husband Diego Rivera; 'Dream of a Sunday Afternoon in the Alameda Central'.   30 MXN ($2.25 AUD) included in the tour for us.  Diego Rivera Museum. 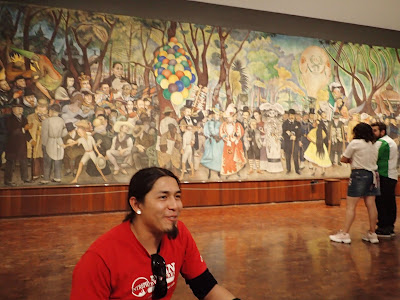 Time to get out of town and go for a wander- next stop was the nearby temple pyramids of Teotihuacan, around an hour away and 50km from Mexico City.

These heavily touristed stone monuments are easily reached via the Aerobuses del Norte bus terminal.
You can take the metro train there but I just ordered an Uber on my phone for a few dollars, got there quickly and purchased tickets at a booth near gate 8 that said 'Pyramides'. 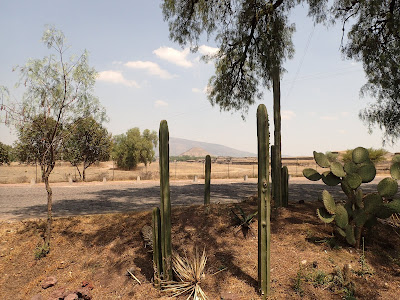 We dropped in on a Sunday which is always super busy apparently as locals take advantage of free entry for Mexican citizens.  There are loads of passable cafes near the various entry gates and opportunities to get out of the baking sun. 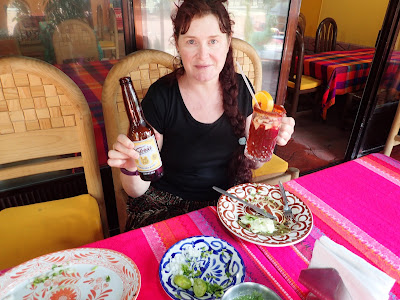 The pyramids are fantastic.  As stunning as anything I have had the fortune to visit in Africa or Asia.  Various gates facilitate entry on a ring road around the site.  We jumped off the bus at Puerta 2 (Gate 2). 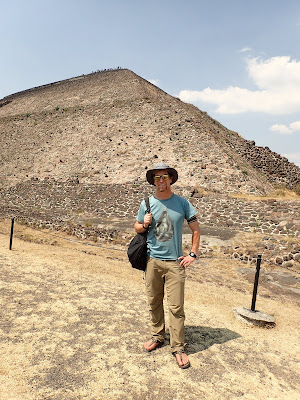 Entry is 70 pesos ($5 AUD) and the 2000 year old complex takes a while to meander through and explore.  We ducked in to sneak a peek and brave the crowds then checked into a nearby family run guesthouse.
Posada Jatziri. 535 pesos ($40 AUD) got a tidy, clean room with a view of the pyramids. 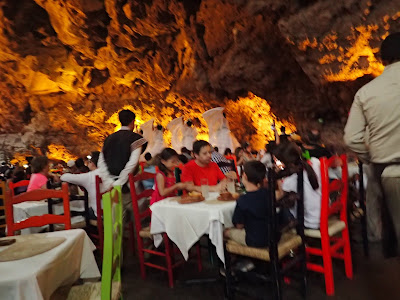 Dinner was taken in a touristy but unique 'cave restaurant' called 'The Grotto' during a heavy rainstorm.
Pricey and heaving with people but great food and cold drinks. Lagruta. 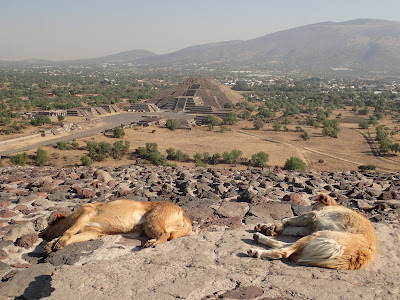 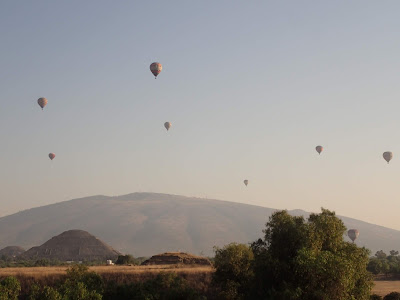 Next morning we watched hot air balloons drifting over the Teotihuacan area from the room and
re entered the temple complex bang on opening time at 9am.

There were plenty of tour groups and other independent travellers scooting in too but it was relativity simple to find some solitude up on top of the Pyramid of the Sun and the Pyramid of the Moon, the highest and second highest monuments respectively. 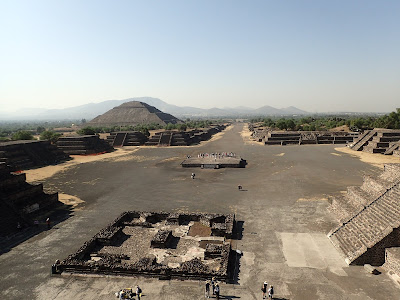 Next stop was Puebla.

We jumped in a taxi to the San Martin de las Pyramids bus terminal which is just outside the main tourist area and caught a bus from there directly to Puebla instead of returning to Mexico City.
Can't remember how much we paid but it wasn't more than 130 pesos each and took around 2 hours.
Most travellers return to Mexico City so we were the only non Mexicans on the coach.

After a scenic ride to an ADO bus terminal I called an Uber and checked into the swanky Hotel 5 de Mayo.   1970 pesos ($145 AUD) for 2 nights including breakfast. 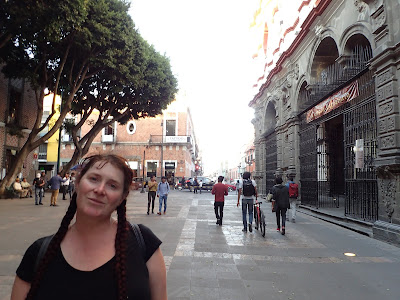 Puebla is a fun, youthful city with some great eating options and historic sights.  We found our way via a confusing local bus system to nearby Cholula (I have no accurate recollection of how I found the correct bus and managed to get there 😏 but it's totally doable). 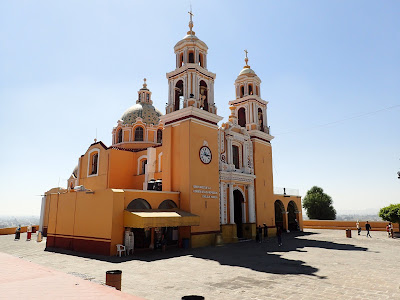 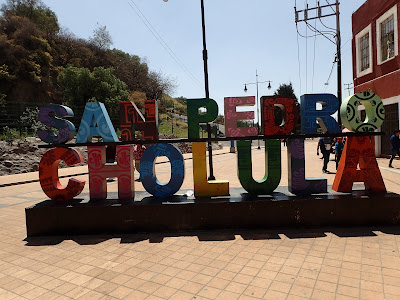 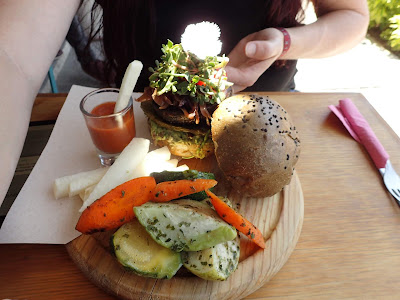 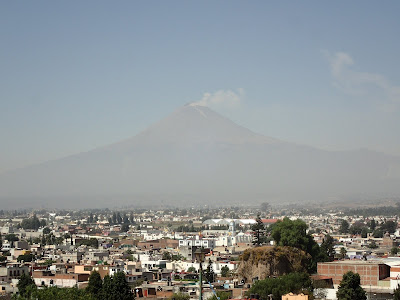 Cholula is a tourist city dominated by the massive Great Pyramid of Cholula, widely regarded as the largest pyramid in the world.

While most of the monument is buried in soil and plant life, excavations of ancient stoneworks dating back 1700 years can be easily sighted whilst rambling along the network of paths and tunnels in the site.
The summit view taken beside the bright yellow 'Church of Our Lady of Remedies' which is plonked on top is dominated by the smoking, surly bulk of the active volcano Popocatepetl.  Super cool. 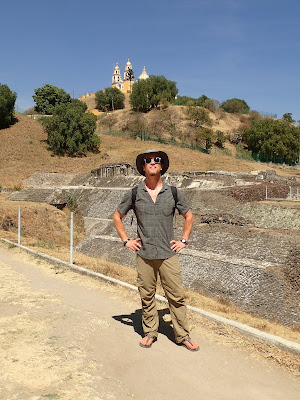 For some reason the adjacent museum had free entry the day I was in town so I nosed around. Although the majority of the interactive exhibits were in Spanish it was well worth while ducking out of the heat for an hour and getting the jist of the place. 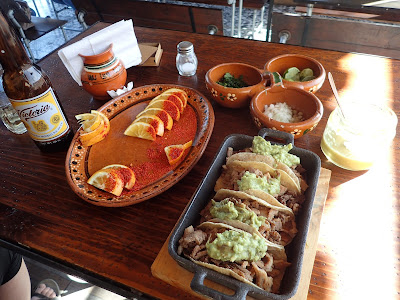 Food was a little pricey understandably but still very good and bars and eateries were literally everywhere.

This bit is to help Vegetarians travelling to Mexico.

Ree is vegetarian (I'm definitely not but I choose ethically raised protein where possible and skimp on the processed shit when not thru-hiking) and Mexico is a nation of hard core meat eaters and most meals are centred around a form of dead animal.
Sometimes 2.

Although not difficult to locate vegetarian friendly food providers in Mexico City and the surrounding region it takes a bit of planning and Google and review sites are your mates here.

Vegamo  Cosy and friendly little spot North East of Zocalo near where we stayed.

ForeverVegano  The Cauliflower tacos were swiftly destroyed.  Fun waiting staff and there is a good beer & wine selection too. Located in the funky Roma district.

La Zanahoria  Although nothing fancy the buffet is extensive and cheap.  Non touristy and local punters.

Tonico 12.  Great little find down the end of the strip alongside the tourist train station in Cholula.  Fantastic coffee and fun vege food.

Ree recommends learning the phrase "I'm a vegetarian" in Spanish- "Soy Vegetariana" (or "Soy Vegetariano" if your a dude) and a list of things you want in your tacos or meal such as refried beans, cheese, and cactus.

She had a basic list of words and phrases written down too.

Be assertive and specific in your request for meat free food and remember the red salty crust on the lemon slices served with tacos are made from worms.

Supermarkets are abundant, priced cheaply and full of fruit, nuts and veges.