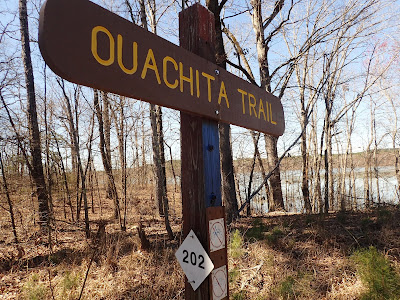 The total distance of the trail is 223 miles/ 359 kilometres. 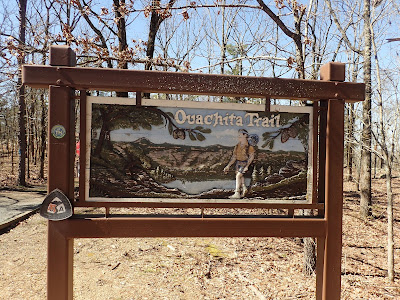 Back in Arkansas!
I promised myself I would return to finish this trail.  So in early March 2019, after a couple of weeks  playing in the jungle clad hills of Oahu and enjoying some sunny days chasing my girlfriend up giant pyramids in Mexico, I found myself in a vehicle piloted by super careful Uber-driver Ariel.
We were heading 17 miles outside the friendly city of Little Rock, to Pinnacle Mountain Visitors Centre.

Ouachita Trail part 2 was on! 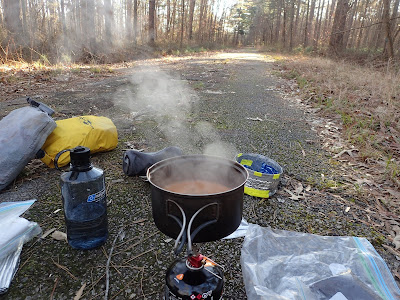 I lucked out big time with the weather on this hike.  Sunny skies, mild temperatures and barely a breath of wind over most of the 6 days.

Last year I walked the Western half of the Ouachita Trail in April and after yanking ticks off myself daily decided to push the start date for this year's hike back a month to March and embrace slightly cooler weather.  That I received and less ticks and chiggers as a result.

However some crazy rainstorms preceded my Arkansas arrival and I was continually wading creeks and rivers.  Nothing scary, just sodden shoes for the first 30 miles. 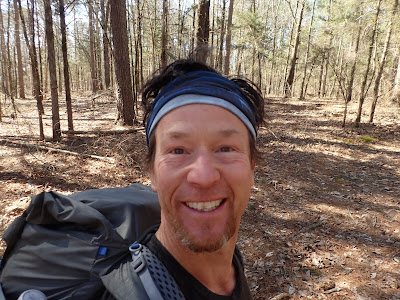 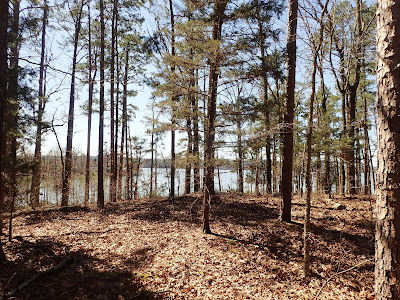 The first 30 miles of the OT pokes it's way along private land owned mainly by Arkansas Water and logging companies and camping is not allowed anywhere on this stretch except for a small plot owned by the Penney family who graciously allow hikers to chuck up a tent.

So for obvious reasons of etiquette and legality I shall say I camped at this location and it was a long night as I didn't get started until around 3pm from Pinnacle Visitors Centre. 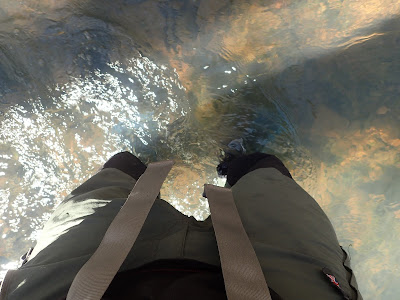 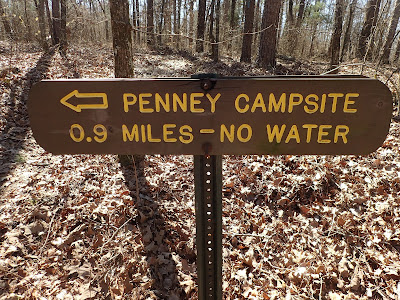 After dark on day 2 I crossed Highway 9 and the open character and dampness of the land sidling Lake Maumelle quickly changed to hard packed trail meandering around ridgelines and skirting saddles.  I was back in the Ouachita Forest proper and I could camp anywhere I chose so I did. 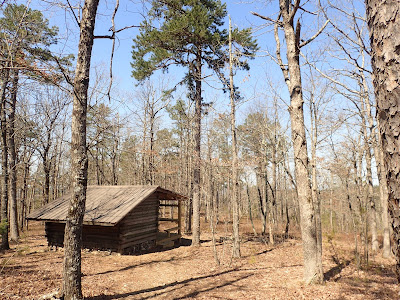 Next morning I awoke to the smell of woodsmoke and tramped the mile and half up to Nancy Mountain Shelter to make breakfast.

Being a Sunday I fully expected to meet people- weekend hikers, at the shelter.
Breakfast conversation with Tom from Pennsylvania and 3 sleepy Eagle Scouts under his charge revolved around what I was going to encounter over the next week and how loud coyotes howl at each other during the night.  (Freakishly loud by the way)

Cool guys and I really feel a bit of hope and optimism for our society when I see young people getting out there and embracing the outdoors instead of being soft and poopy pants and mindlessly glued to their phones.

Oh yeah and the woodsmoke I could smell was from their campfire the night before. 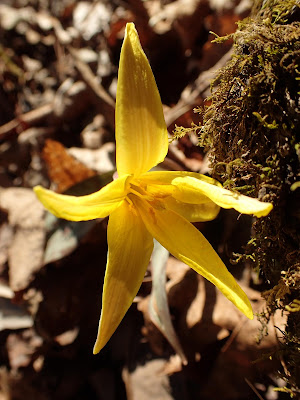 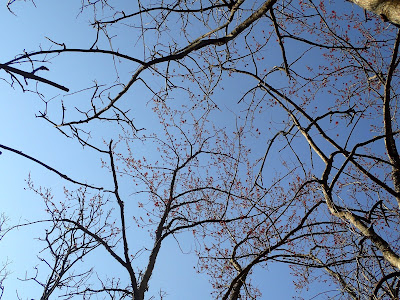 One of the highlights of this years hike on the OT was the side spur track up West Pinnacle Bluff in the Flatside Wilderness.

I was told many times I 'absolutely have to do it' by the multitude of weekend walkers I met beforehand... so instead of ignoring them I did.

And yes if the skies are as blue and serene as it was for me you may get to gaze out at a beautiful piece of North America and go all tingly and dreamy.
Arkansas is a gem of a state and I only hope it stays rural and underpopulated and chock full of lovely forest and fresh clean lakes. 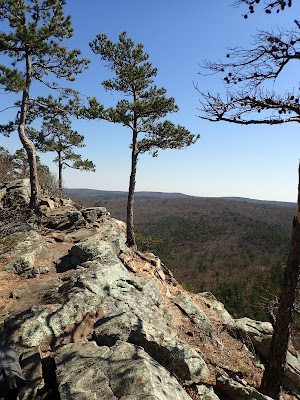 Another highlight of the trail this year was the season and state of the forest canopy; it was Spring time and leaf off.

Which meant the red and white oaks and hickory trees were mostly bare and pulled in the views from the ridgelines.  The pines at higher elevations emitted a pungent scent and it was just very pleasant wandering all round. 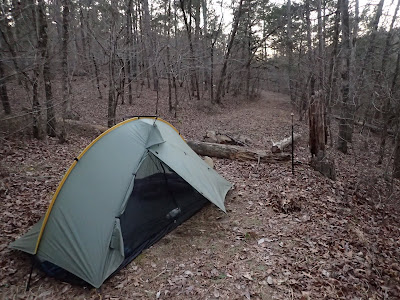 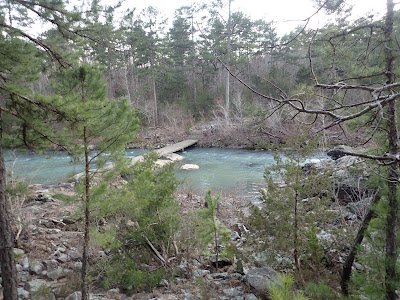 My second to last night involved my favourite campsite.  I threw the tent up on a flat spot by Iron Forks Creek.

What a place!  Crashing water, densely wooded hills and a convenient concrete causeway across the creek.  I cooked my dinner on the walkway as the sun dipped low and the full moon rose and I nervously peeked over my shoulder for visiting bears.
If there is a typical bear habitat on the Ouachita Trail then Iron Forks Creek crossing is it.

Instead a fat resident beaver was my impromptu dinner company.  He/ she swum around a few times, checked me out, sniffed the air and pushed on upstream. 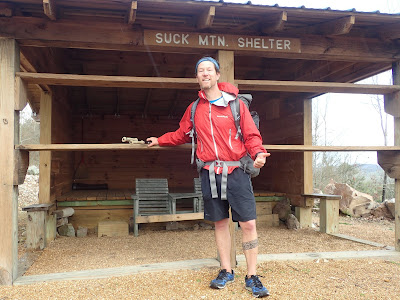 Light rain drizzled down as I trudged up and down various small hills and rises to the focal point of my hike; Suck Mountain Shelter, where I finished up last April.  It was surreal being back less than a year later and I read my journal entry from that time with amusement.  Not many folks had signed in since then.
Even though I felt the Ouachita Trail was quite a lot busier this year than last, I have to admit it is still far from crowded.

Job done.  Hike completed!  I had linked my footsteps together from 2 section hikes over the space of a year and experienced a crazy amount of travel getting there and back to Australia and there again.

Now to find my way to Hot Springs... 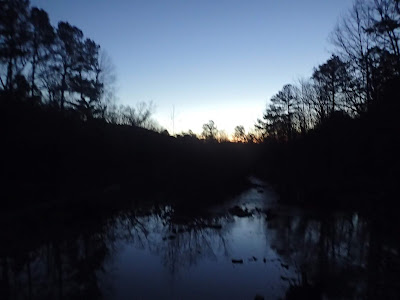 That evening I camped out near Story Creek Shelter which is 8 miles back down the trail where I had come from.

An all female party of 5- Grandmother, 2 daughters and 2 kidlets were having a blast around the campfire.  They were super friendly and great conversation but I'm fortunate I declined their offer of sharing the shelter- the snoring I over heard as I slipped out before dawn the next morning was deafening! 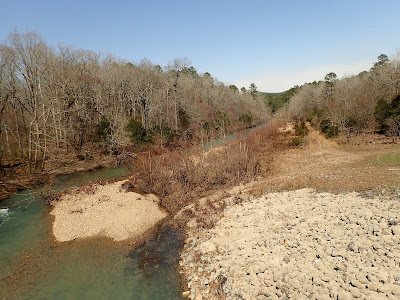 I was a bit of a dork when finally getting off the trail.
I neglected to check my map when I hit Highway 27 and see which direction the town of Story was located.
And mobile reception (cell service) was non existent.

After walking North for 3 miles I was wondering why no signs were alerting the (hopefully) nearby presence of Story.  Instead I walked through a locality called Aly.  I managed to get a slight signal and booted up Google maps... and yes the blue dot indicated I was heading the wrong direction.  North instead of South.

3 miles back to where the OT crosses the highway and 5 more miles onward from there road bashing to Story.
Bloody hell! 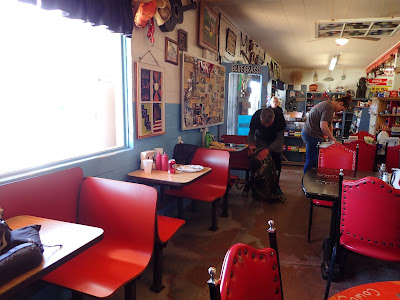 Main point of this recollection is: if you get spat off the trail onto Highway 27, head South whether attempting to hitch or walk to Story.  Saves a bit of senseless road walking and faffing about.
Now you know.  And so do I....

Anyway, I rolled into the Bluebell Cafe and yakked away for a few hours with another hiker, David from Oklahoma, who I had met briefly a few days before at Blue Mountain Shelter.  We both smashed food and drink down our necks and relished the civilised surrounds of the Bluebell.

This was David's first extended hike and he was calling it good after 114 miles as well.

It was fantastic to meet someone close to my age who had thrown themselves into this amazing world and was hooked and really digging it.  Nice one mate! 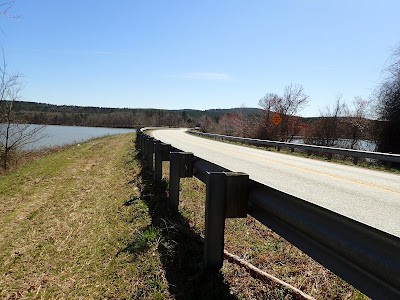 Lori from the Bluebell hooked me up with a local good ol' boy to shuttle me the 50 miles into Hot Springs airport where I picked up a rental car.

The next evening I met up with Wendy & Mitch and their daughter Kassie and puppy Pepper at their beautiful country house for a home cooked meal and lots of trash talking into the night.
Gracious hosts as always and catching up was a perfect and fitting end to my Arkansas adventure. 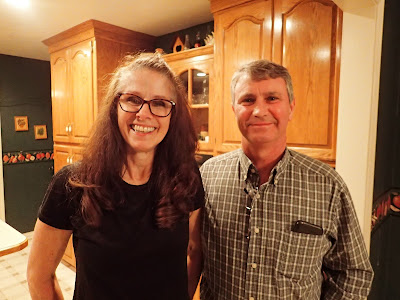 FOOT; Friends of the Ouachita Trail