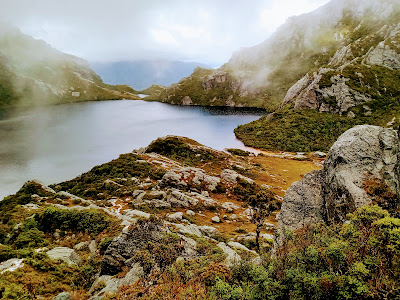 Here we go- the big kahuna.  The infamous Western Arthur's!
At present only the A to K Western Arthur's circuit is permissible, not the full traverse, so that's what I looped around at the end of April 2021.
Common impressions floating around about the hike include:
The track that supposedly induces a continual 5 day adrenaline rush and compels people to regal stories of agonising hardship and death defying adversity in the Southern hills of Tasmania.
Well yeah, nah.  Sort of.  Depends.
This wild romp in the mountains has been promoted and discussed ad nauseam online for years and I actually heard whispers of the rough n' ready Western Arthur's (WA) and the apparent difficulty in traversing the region as being second only to mighty Everest whilst wandering around Nepal yonks ago.
Tales of terrified walkers and sickly down climbs abound and they are probably mostly almost maybe true.
This is my 2 cents and some dodgy observations regarding the WA  Alpha to Kappa Circuit. 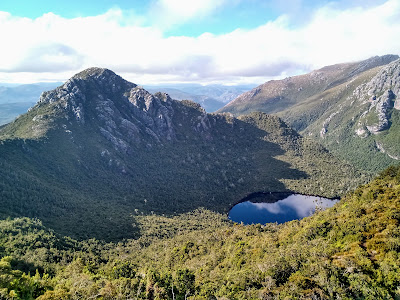 GETTING THERE:
Around 4.5 hours of driving South from Launceston or 2 hours West from Hobart to the trail head/ parking area/ campground at Scotts Peak Dam Road, South West National Park.
No scheduled transport runs to Lake Pedder, however on demand shuttles originate in Hobart.
I used one (cannot remember the business name) waaaaay back in 2011 when I hiked the Port Davey and South Coast Tracks and it cost me around $120 from Hobart.
A young guy from Sydney I met at Lake Oberon said he had jumped on a public bus to Westerway (a town on the B61 highway from Hobart) and hitched a ride to Lake Pedder.
Maydena is the last settlement where provisions can be procured but I would hit up a larger sized town such as New Norfolk beforehand where choice and range is far more extensive if you need anything essential.
Windy roads and spectacular forests will guide you down the C607 to Lake Pedder.
The final 30 kilometres is gravel and potholes so take it easy.
There is a walkers register at the Port Davey trail head where the hike begins, the track starts over the road just to the left.
PERMITS:
As the Western Arthur Range lies within South West National Park you are required to purchase a Tasmanian Parks Pass, displayed on your vehicle if you have parked one at the trail head.  Tas Parks Pass Website
SAFARI TRACK RATING:
Fuckin gnarly.
This 54 kilometre circuit winding along purple-white quartzite rock and squeezing between tight scrubby bush has been run in under half a day, but most punters take 5 to 6 days depending on the weather, how heavy their pack is and how many people are rolling together.
The first 7 kilometres on the Port Davey Trail to Junction Creek is legendary even in Tasmania for it's thigh deep mud and the only way to successfully hike it is to embrace the slop and laugh it off.
After the first easy spell of duckboard planking it gets nasty real quick.
Recent popularity of Lake Oberon as a 2 or 3 day out and back hike has smashed the low lying ground and any improvement to the 'track' will probably only encourage more foot traffic.  It's is what it is and I don't feel any need to revisit it soon.
The climb up Alpha Moraine, basically a steep, rocky ridgeline, is straightforward and the path to Oberon is nicely constructed and unchallenging.
After that the fun stuff begins; the down climb to Lake Oberon gives you a taste of what is to come in the days ahead.  Very doable and nothing outrageous but not the easy, flowing walking- you know, eating up the miles- that I personally chase.   Slow going and the arms are utilised often.
I carried and used a 10 metre 6mm prusik cord as a rope to lower my pack down the very steep sketchy bits when I felt unsafe downclimbing with it on my back.
Just remember, the holds, tree roots and ledges are always there when you need them even if you can't see them.
After Lake Sirona I bowled down the track without any complications and took the shortcut to McKay's Track which was flat, fast and spat me out at Junction Creek for a return battle with the mud.
DAY 1:  Scotts Peak Dam Trailhead to Lake Cygnus.  17.3 km.
7 hours.  Discovering the magic of these mountains, good camping on the platforms.
DAY 2:  Lake Cygnus to Lake Oberon.  4.2 km.
4 hours.  The rain hooted down at 12pm so I threw up the tent and read Beau Miles' latest book.
DAY 3:  Lake Oberon to Haven Lake.  8 km.
9 hours.  Really fun day poking up and down and around the cliff edges and taking in my surroundings.
DAY 4:  Haven Lake to Scotts Peak Dam Trailhead.  24.5 km.
10 hours.  Mostly flat walking, great sighting the range from a distance. 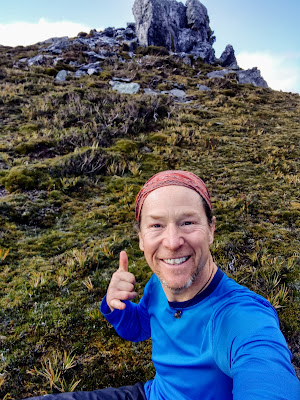 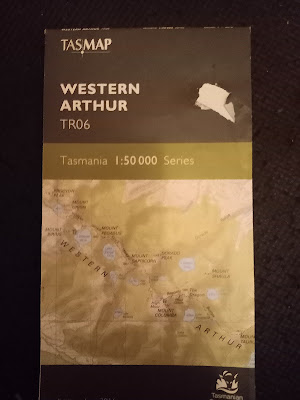 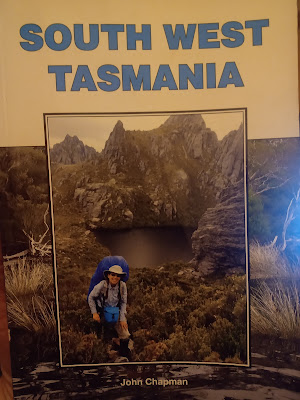 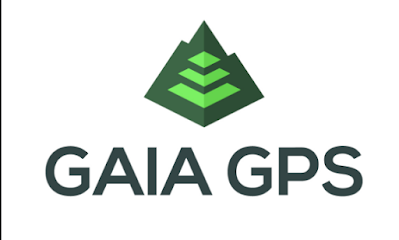 Every now and then the track would get a bit faint or seem incongruous so I checked the basic offline Western Arthur's Traverse map on the Gaia App.
There is a fair bit of Telstra mobile phone coverage on the high points overlooking the Arthur Plains facing North too. 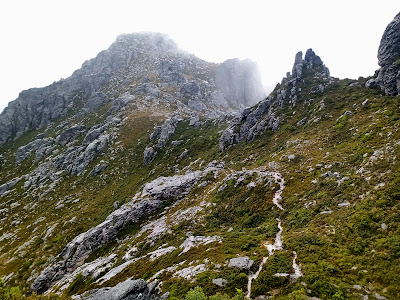 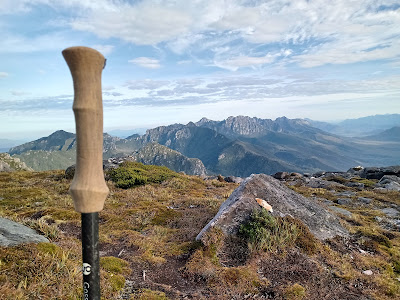 GEAR:
I hate talking gear.  I swear the only reason some dudes get outside is to use their gear.  And talk gear.  And then talk about how they used their gear.  Slap me.
Anyway, it's an exciting changeable environment up there at 1000 metres above sea level in the Arthur's so here's what I took gear wise for what it's worth.
No huts, no shops, few bug out options.
I went solo and possibly a tad overboard because of this and carried a monster pack weighing 13.8 kilos everything included; full kit, food for 6 days and a litre of water.  Too heavy to feel safe on many of the down climbs so I belayed my pack when necessary and it was torn to shreds by the end of my 4 days of fun.
But hey right.
Tarptent Rainbow (shelter), Sea to Summit Ether Light Mattress, Heavy duty Montbell Down Jacket, 2 quilts (Tier Gear and Enlightened Equipment) just in case I froze my arse off, one Gossamer Gear hiking pole and plenty of clothing.
Topo Mountain Racers on the feet and I never wear socks.
I carried gaiters but they just stayed in my pack as cargo.  I wore pants and shorts as the sun or cloud dictated.
I had read somewhere that the mice that lurk around the official campsites were very friendly (correct) and keen on an easy feed so I stored my food supplies in an OP (Odour Proof) sack.
Aside from a wee dusting on Day 2 I struck a mostly fine weather window and although my rain jacket was useful on the windy ridgelines, late April wasn't really cold or wet this year. 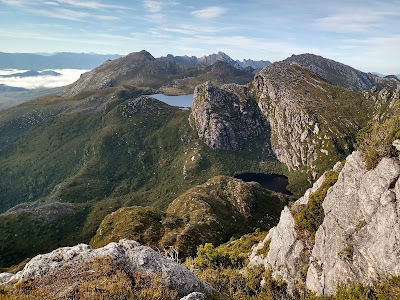